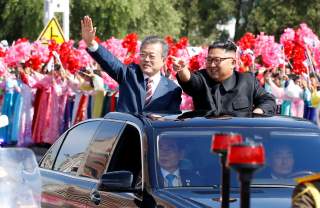 Chairman Kim Jong-un declared in his New Year’s speech that 2019 will be the year for economic development. Improving people’s lives is his top priority and tackling energy shortages is an urgent task. Indeed, Kim might have grasped the lesson learned by China’s Communist Party from the collapse of the Soviet Union—regime survival ultimately depends on economic reform and development.

However, Kim faces two obstacles. The immediate obstacle is the stringent regime of international sanctions, which have resulted in a collapse in North Korea’s visible, commercial exports to its predominant economic partner, China, which are down almost 90 percent in January to November 2018 from the same period in 2017. Moreover, U.S. Treasury sanctions have effectively blocked North Korea from the global dollar payments system, further boxing in the North’s foreign trade. Sanctions had depressed domestic economic activity in 2017 according to the Bank of Korea and the situation likely worsened in 2018.

But even if sanctions were lifted, North Korea’s extremely weak institutions pose the most binding constraint for North Korea’s economic development. The World Bank’s rule of law and control of corruption governance indicators place North Korea in the bottom rungs of institutional strength, on par with Libya, Venezuela and Zimbabwe. This is reflected in confiscatory exchange rate and exchange control policies, all of which have kept domestic savings and capital accumulation low.

History teaches us that even China’s financial reforms took more than a decade to gain traction. Until North Korea can save more, it will need to depend on either South Korean or other foreign governments for financing, or through multilateral economic cooperation funds, as recently postulated by Secretary of State Mike Pompeo. But relying of foreign government funds will probably not provide enough capital for North Korea’s infrastructure needs, which Citibank estimates at $63 billion dollars over the long term.​

Therefore, a brighter economic future for North Korea would be best served by rapid progress in verified denuclearization. On the financial front, this should be complemented with North Korea’s seeking membership in the International Monetary Fund this year, which would enhance the North’s transparency and policy capacity and credibility. If done successfully, the North would eventually gain access to international capital markets, easing the burden on taxpayers in South Korea and elsewhere, and thereby realize its economic potential which is probably similar to that of its successful neighbors.

Tom Byrne is president of the New York City based Korea Society. He is also an adjunct professor at Columbia University. Before joining the Korea Society he was the Asia-Pacific, Middle East regional manager in Moody’s Investors Service Sovereign Risk Group.