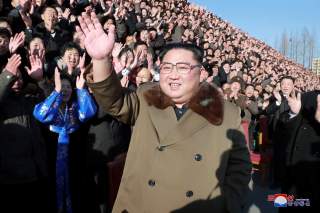 There are several possible outcomes I think from the summit if and when it happens.

The first is what I and others call summit theater: a reiteration of Singapore with maybe some cosmetic enhancements, but largely more of the same. This would just essentially keep the diplomatic process going at the high level in order to allow Trump to claim “no rockets and nuclear tests” and Kim to continue to grow the program, giving up little in return. This would essentially kick the can down the road for Trump; Kim would pretend to disarm and Trump would continue to pretend to believe him.

The second outcome—one which would be fantastic given the vegetative state that the working-level meetings have otherwise seemingly been in—is some sort of middle road agreement, or “interim agreement,” that focuses on slowing the North Korean nuclear program in some way, even through a partial fissile material freeze for example. A verifiable freeze on plutonium, tritium, and/or uranium production would have a meaningful impact on North Korea’s future force posture and would not require Pyongyang to provide an inventory of its entire program, which it fears is either a trap or a target list for the United States. But something of this magnitude, such as a partial verifiable closing of Yongbyon, would require a concrete concession from the U.S. Concessions could include some sanctions relief and maybe a permanent suspension of large scale exercises or more (Kim may lead Trump right where he wants to go on troops for example). This outcome could really move the ball forward if we can get it done. Both sides could achieve something meaningful without losing face; Trump can say the long-term goal is still denuclearization and Kim can say this is just step one and that he has not relinquished any of the “treasured swords of peace” he has already produced. This is actually the door we should be pushing on. Instead of swinging for the fences with a largely delusional insistence on unilateral disarmament without any concessions from the United States, let’s first try to get on base and build some trust through meaningful arms control objectives. The question is whether there is enough time to hammer out the details to reach an agreement like this, or whether we should get a broader framework along these lines and work out the details later. The danger with the latter is that North Korea is extremely skilled at running out the clock, so it is important to be as concrete as possible at the summit, despite the North’s inevitable resistance.

The third, and hopefully least likely, outcome is an aborted summit because one side pulls the plug. This could happen if the working-level meetings leading up to the summit go very poorly for example. But even then, I suspect this is highly unlikely because both Trump and Kim (1) seemingly love each other and flatter each other and (2) are too personally invested in the summit to pull the plug. Even if the working-level meetings go as badly as one can possibly imagine, it’s not a foregone conclusion that Trump won’t choose Kim if forced to choose between him and Bolton, who might argue for canceling the meeting. If this happens, it would be the worst possible outcome since, with the diplomatic exits shunted off, we might be on a renewed collision course with North Korea. But I suspect this third outcome is unlikely, and hold out hope for the second outcome, while preparing myself for the first outcome.