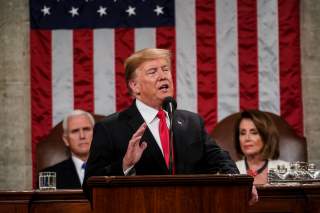 In late 2017, United States president Donald Trump and North Korean leader Kim Jong-un were trading tension-building Twitter barbs. Now they are set to trade more diplomatic words across a table for a second time later this month in Vietnam. We should be thankful for that since, as Churchill noted, ‘’Jaw, jaw is better than war, war.”

But what will emerge from the second Trump-Kim summit? A realistic appraisal suggests that we should lower any expectations for far-reaching substantive change on the North Korean side. Kim is very unlikely to give up his nuclear weapons without a fight. He knows what has happened to Libya and Ukraine when they did—and what has befallen countries who have fallen afoul of the U.S. without them (see: Hussein, Saddam). Like it or not, nuclear weapons help guarantee territorial integrity and protect the government in power from direct military efforts at regime change. Political leaders in all types of regimes are nearly single-mindedly interested in maintaining their power—and even more so when a forcible removal would likely mean death, imprisonment, or exile.

And the United States knows this. Dan Coats, the U.S. Director of National Intelligence, told the Senate just last week: “We currently assess that North Korea will seek to retain its [weapons of mass destruction] capabilities and is unlikely to completely give up its nuclear weapons and production capabilities because its leaders ultimately view nuclear weapons as critical to regime survival.” For Kim to make what would by this logic be a risky move, Trump would have to do something to change the basic security calculus. But it is hard to imagine there are any kind of binding security guarantees (or, on the other hand, credible threats given the costs of war) that the U.S. could make that would convince Kim it was a safe move to give up his trump card against outsiders who might want to see him go (or dead).  Given this, it is hard to imagine that we’ll see any meaningful movement towards real denuclearization emerging from the Vietnam jaw-jaw.

But as Boomer’s like Trump know from the Rolling Stones, “You can't always get what you want.

But if you try sometime you might find. You get what you need.” And what the U.S. needs is less the denuclearization of North Korea than reaching a more stable peace on the Peninsula and ensuring that those nukes never reach the United States or its allies. So Trump should calmly reassert our commitment to deterrence while seeing if there is an opportunity for a deal on missiles and further weapons production. He should also provide reassurance to Kim that while we want to see the North Korean system evolve from its present barbarism, we aren’t interested in overthrowing the regime forcibly. And finally, Trump could encourage further reconciliation between the North and the South while offering economic carrots for movement on security issues. But it is difficult to foresee any real progress on what we need if what we want and shoot for defies the logic that Kim knows: nukes equal regime security.