North Korea Boasts About Its Flurry of Missile Tests 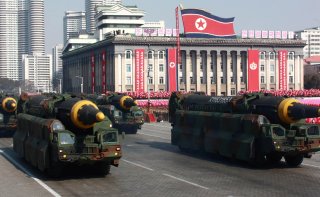 The North Korean Foreign Ministry issued a statement lauding the country’s “remarkable achievements” in a series of missile tests conducted since 2022 began. "In today's world where many countries waste time dealing with the United States with submission and blind obedience, there’s only our country on this planet that can shake the world by firing a missile with the U.S. mainland in its range," read the statement, according to Reuters. "There are more than 200 countries in the world, but only a few have hydrogen bombs, intercontinental ballistic missiles, and hypersonic missiles."

The statement highlighted the Hwasong-15, which is the longest-range intercontinental ballistic missile (ICBM) ever launched by North Korea. Widely regarded as the DPRK’s most powerful missile, the liquid-fueled Hwasong-15 was last tested in 2017.

Pyongyang’s statement comes on the heels of a flurry of weapons tests conducted throughout January, including tests involving a new hypersonic missile, several cruise missiles, and the Hwasong-12 intermediate-range ballistic missile (IRBM). The tests entailed a total of seven launches, the most ever reported in a single month.

Jenny Town, director of 38 North, a Washington-based North Korea program, told Reuters that the statement reads more as a boast than a concrete threat. “The formulation is very passive. Not that they will do it, but that they can,” she said.

A U.S. State Department spokesperson reportedly stressed that Washington harbors no ill intent toward North Korea and urged Pyongyang to return to the negotiating table. "The United States has a vital interest in deterring [North Korea], defending against its provocations or uses of force, limiting the reach of its most dangerous weapons programs, and above all keeping the American people, our deployed forces, and our allies safe," the spokesperson told Reuters.

The DPRK’s recent round of weapons tests comes amid ongoing efforts by South Korean president Moon Jae-in, who is set to leave office in the coming months, to secure a lasting peace deal with North Korea. Pyongyang has consistently ignored calls from Washington and Seoul to resume peace and denuclearization talks, which sputtered to a halt in the summer of 2019.