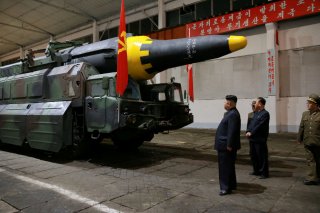 The missile launch, which is sure to raise fears of a nuclear escalation, was first reported by Japanese and South Korean authorities on Sunday. Korean Central News Agency (KCNA), a North Korean state-run news outlet, said the test was conducted to verify the Hwasong-12 missile’s accuracy, adding that the missile took a high trajectory to avoid flying over neighboring countries. The missile allegedly flew just over 800 kilometers and reached an altitude of 2,000 kilometers before landing in waters between the Korean Peninsula and Japan.

The Hwasong-12 is an intermediate-range ballistic missile (IRBM) that was revealed to the international community during a North Korean military parade in April 2017. With a reported operational range between 3,700 and 6,000 kilometers, the Hwasong-12 is widely believed to be capable of targeting the U.S. Navy base on the Western Pacific island territory of Guam.

As the Hwasong-12 is the most powerful missile launched by North Korea since 2017, the launch prompted renewed fears that the DPRK could resume testing long-range strategic weapons. The Sunday launch marked the DPRK’s seventh weapons test in January. According to experts, this is the highest number of North Korean missile launches recorded in a single month. "It's not just what they did yesterday, it's the fact that this is coming on the heels of quite a significant number of tests in this month," a senior U.S. official told reporters in Washington. The official called on Pyongyang to join direct talks without preconditions.

South Korean defense minister Suh Wook reiterated Seoul’s concerns over the DPRK’s flurry of launches this month. "North Korea’s series of missile test-fires, including intermediate-range ballistic missiles, pose a direct and serious threat to us and a grave challenge to international peace and stability," Suh said after a briefing, according to Reuters. "We will maintain a full military readiness posture that can respond immediately to any situation."

In 2018, the DPRK announced a moratorium on tests of nuclear weapons and certain long-range intercontinental ballistic missiles after historic summits between North Korean leader Kim Jong-un and former President Donald Trump. It is unclear if Pyongyang considered IRBMs like the Hwasong-12 to be covered by that self-imposed restriction. Kim said he was no longer bound by the moratorium after peace talks sputtered in 2019, which he blamed on a lack of U.S. diplomatic reciprocality. In a veiled threat to resume temporarily-suspended testing activities, the North Korean leader instructed officials earlier this month to reconsider previous “trust-building measures."