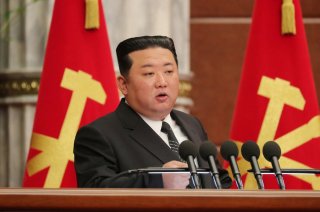 Data from China’s customs agency showed that North Korea had abruptly stopped importing healthcare products related to Covid-19 in May, only days before the country announced that it was experiencing its first known outbreak of the virus, according to Reuters.

In the first months of 2022, the North Korean government imported face masks, ventilators, thermometers, rubber gloves, and doses of China’s domestic Sinovac vaccine, according to Chinese customs. Data showed that North Korean officials had purchased more than 10 million masks, nearly 100,000 thermometers, and roughly 1,000 ventilators from China from January through April, but none of any of these in May. The country’s overall imports from China decreased from nearly $100 million in April to only $14.5 million in May; most of the remaining total came from imported food products, including sugar, soybeans, and flour.

The decrease in commerce between China and North Korea can be partially attributed to an outbreak of Covid-19 cases in the southern Chinese city of Dandong, which borders North Korea and is the site of a critical railroad bridge crossing the Yalu River between the two countries. After the outbreak in Dandong and further consultations with the North Korean government, China suspended its train services across the border at the North Korean government’s request to halt the spread of the virus. This measure would be consistent with North Korea’s expansive lockdown protocols, including a virtual shutdown of all cross-border trade in early 2020 after the first outbreak of the Covid-19 pandemic in southern China.

Cases of fever are decreasing in North Korea following the country’s initial outbreak in late May. However, according to the North Korean state-run Korean Central News Agency (KCNA), the virus has stretched Pyongyang’s already-weak healthcare system and highlighted deficiencies in the authorities’ efforts to keep it out through restrictive border control measures. The North Korean government has also been unable to directly confirm how many of its citizens have the virus, owing to the limited availability of testing kits. The country’s inability to estimate its caseload led World Health Organization (WHO) officials to speculate in early June that its Covid-19 cases were increasing rather than decreasing, although Pyongyang has denied this.

The North Korean government has also refused repeated offers of pandemic-related assistance from South Korea and the United States.