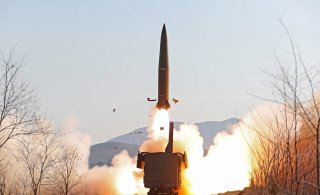 North Korea conducted a series of military exercises early on Friday morning, launching a short-range ballistic missile, firing more than one hundred rounds of artillery, and flying at least ten fighter planes near the “demilitarized zone” dividing North and South Korea. Pyongyang claimed that the actions were a “warning” to South Korea and the United States following recent joint military drills between the two nations.

The missile was reportedly launched at 1:49 am on Friday morning from North Korea’s west coast, according to South Korea’s Joint Chiefs of Staff. It flew for roughly 700 kilometers (435 miles), reaching speeds of Mach 6 and an altitude of fifty kilometers (thirty-one miles) before landing in the Sea of Japan. The joint chiefs also claimed that Pyongyang had fired 170 artillery shells and had conducted aircraft flights near the DMZ.

The U.S. Indo-Pacific Command (USINDOPACOM), which oversees the U.S. troop presence in South Korea, acknowledged in a statement that it had detected a “ballistic missile launch” by North Korea but had “assessed that this event does not pose an immediate threat to U.S. personnel or territory, or to our allies.”

North Korean officials claimed shortly after the launch that it had been carried out as part of a number of “strong military countermeasures” to the U.S.-South Korean exercises, which involved the use of the USS Ronald Reagan aircraft carrier.

Friday morning’s launch is the latest in a series of at least seven missile launches since the beginning of October, with several of the launches roughly coinciding with the visit of Vice President Kamala Harris to Japan and South Korea. One of those launches flew over the northern Japanese island of Hokkaido, leading residents to shelter and prompting angry condemnation from Japan’s foreign minister.

U.S., Japanese, and South Korean intelligence officials have warned that North Korea is preparing for a nuclear test—Pyongyang’s first such test in five years and the seventh since it acquired nuclear weapons in 2006. Although little information has been shared about the test, it is possible that it could be a miniaturized nuclear warhead, which North Korean leaders have expressed interest in developing for use on missiles. The nuclear test would be a violation of several United Nations Security Council resolutions, and the United States, South Korea, and Japan have all warned that they would impose further costs on North Korea if it proceeded with the tests, although their ability to use economic leverage against Pyongyang is restricted by the country’s highly autarkic economy.