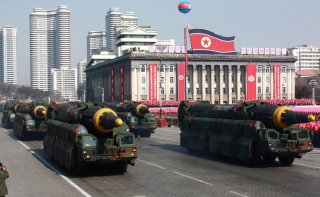 South Korean unification minister Kwon Young-se harshly criticized North Korea for its reported plans to test a nuclear weapon in the coming weeks, arguing that the administration of South Korean president Yoon Suk-yeol would respond with far greater severity to such an incident than Yoon’s predecessor, President Moon Jae-in, had.

Kwon made the announcement during his remarks to an international press conference in Seoul, South Korea’s capital. The unification minister emphasized that while the South still sought dialogue and good relations with North Korean supreme leader Kim Jong-un, it would no longer be willing to pay a substantial political price for the appearance of dialogue if North Korea remained belligerent or insincere.

“Any response that we might have against a possible provocation will be much sterner than what [North Korea has] experienced in the recent past,” Kwon said.

Yoon, who assumed office in May, has aligned South Korea’s foreign policy far more strongly with the United States than Moon, a liberal who had sought better relations with North Korea—an approach often described as an extension of the “Sunshine Policy,” a similar period of inter-Korean detente under former President Kim Dae-jung.

Kwon announced earlier in the week that Pyongyang had completed its preparations for a nuclear test, a step that other Western and South Korean leaders have warned about in recent weeks. The test would “come as no surprise,” Kwon said at the time. “Everything is ready. What is left is [Kim’s] political decision.”

Kwon suggested that Kim had sought to bolster North Korea’s weapons program during the West’s attention to other global crises, including the ongoing Russian invasion of Ukraine and the United States’ recurring tensions with China. He concluded that the North Korean leader sought to “maximize the [political] impact of any nuclear test.”

The nuclear test would be North Korea’s seventh test since it acquired nuclear weapons in 2006 and the most recent since September 2017, a high point in tensions between Kim, Moon, and newly elected U.S. president Donald Trump.

Although North Korea has not tested a nuclear weapon in nearly five years, it has conducted scores of other missile tests in the intervening years. In the first months of 2022, Pyongyang has conducted eighteen confirmed tests, including at least one nuclear-capable missile and (allegedly) a new hypersonic missile.

Despite the escalating rhetoric, Kwon emphasized that diplomacy would continue, claiming that Seoul remained “firmly committed to addressing all inter-Korean issues through dialogue.”