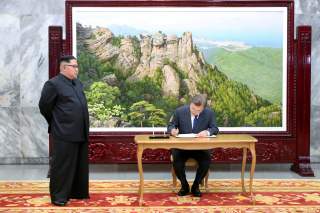 2019 will see drawn-out talks between the United States and North Korea—with some substantive progress that both will claim as a success. In the end, North Korea will not denuclearize any time soon; though a deal to later give up its nukes may be possible. There will be another volatile period of high bluster and threats before an “agreement” is reached. The risk of war always exists, but is palpably lower than last year and, as such, a very good thing.

South Korea will remain full steam ahead towards “normalization” with North Korea. The South and America must closely coordinate actions here, but this is unlikely. Despite public pronouncements to the contrary, the disconnect between these two allies will be a disconcerting and intense source of friction—which will work in North Korea’s favor.

North Korea will boost its leverage by continuing to produce fissile material (both plutonium and highly enriched uranium)—at a rate of about one nuclear bomb’s worth every eight weeks. It will also persist with limited missile activity without an actual test unless things get harsh with the United States.

(1) U.S.-China relations—racked by the recent Marriott hacking charges, ongoing tensions in the South China Sea, and the growing intensity of trade frictions marked by the detention of Huawei’s Meng Wanzhou—will surely impact U.S.-North Korea negotiations. If things between America and China worsen, North Korea will feel less constrained or pressured.

(2) The FBI Special Counsel’s and other Justice Department investigations are wild cards. As legal or political exposure for Trump increases, an already distracted President becomes even more preoccupied, allowing North Korea to take advantage of this inattention. On the other hand, a President needing a critical “policy win,” will focus on the one area he has freedom of action, foreign policy. Trump may too eagerly close on a deal with the North or reactively decide to stir up tensions with Iran.

Bottom line: Kim Jong Un in 2019 will continue to do what he, his father and grandfather have done best—playing much more powerful countries off of each other to advance his strategic interests. This includes strengthening his power base internally, softening his image abroad while strengthening his military capability and maintaining just enough economic flows into his very poor country.

Philip Yun is currently Executive Director and Chief Operating Officer of Ploughshares Fund. Prior to joining Ploughshares Fund, he was a vice president at The Asia Foundation (2005-2011) and a Pantech Scholar in Korean Studies at the Shorenstein Asia Pacific Research Center at Stanford University (2004-2005).