Is the Rumor of Kim Jong-un's Death Believable? 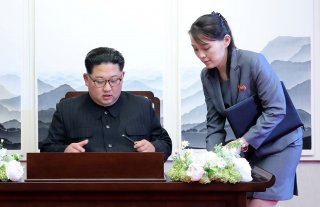 Sun Tzu’s most famous quote reads, “All warfare is based on deception.” North Korea, a military state on a constant war footing, intentionally makes it extremely difficult to know what’s going on inside its territory as a way of fortifying its security. Without human intelligence, intel on North Korea is notoriously unreliable. Whenever there’s a rumor about the country, it’s wise to be skeptical about its veracity. But it’s also important to be prepared for change as change is inevitable.

With a paucity of information, why speculate about the potential death of North Korea’s leader Kim Jong Un? Because the circumstances surrounding the death rumor fit a plausible story so perfectly, it’s hard to dismiss outright. An overweight dictator with a history of health issues fails to attend his country’s chief holiday, and an unnamed source sounds the alarm. It’s almost too perfect, raising the risk of confirmation bias.

If the near-cinematic quality of the coronavirus pandemic has taught us anything, however, it’s that scenarios that seem straight out of science fiction can’t be ignored. Last winter, weeks before the coronavirus broke out, I gave a speech in Tokyo on U.S. foreign policy and concluded that the biggest threat to the global order would be a pandemic, given the lack of international cooperation. I probably pictured something more like Contagion than hospital tents in Central Park.

A crisis on the Korean Peninsula during a global pandemic would be a perfect storm. But it’s important that we avoid letting the health emergency scramble our cognitive acuity. As Ryan Hass of Brookings astutely noted, predictions made in a fog of crisis tend to have little predictive value. Being holed up in an eerily quiet New York City, the pandemic’s epicenter, which now resembles a movie set, has given daily news a surreal quality. What brought about the speculation about Kim?

Kim was absent from the April 15 anniversary ceremony of his grandfather’s birthday, the most important holiday in his country, a nation imbued with cultish beliefs about its founder. Kim has been missing from public view for weeks. Compounding that is the record of Kim’s health. In the past, doctors have noted Kim’s breathing difficulties, associated with heavy smoking, drinking, and poor diet. Kim is about 300 lbs, obese, especially for a man 5 feet 7 inches tall. He’s only 36 years old but moves about like an elderly man and has grappled with gout.

Kim is thought to have undergone a heart procedure and may be resting in or near Wonsan. Since then, he was described as in “grave danger,” according to an unnamed U.S. official, who spoke with CNN. Health issues, including diabetes, heart issues, and obesity, run in the family. Kim Il Sung died of a heart attack in 1994. South Korean media have downplayed the possibility, and no unusual activity has been seen at the North Korean embassy in China or in North Korea itself.

If Kim died, would the dynastic successor be his father’s 65-year-old half brother Kim Pyong-il, his 31-year-old sister Kim Yo-jong, or both collectively? Given the prominent appearance of his sister in recent events and the centrality of propaganda (she is vice director of the state propaganda department) in Stanilist dictatorships, my bet would be she would get the succession eventually. She’s said to be respected, gets along with Donald Trump, and has been groomed for leadership.

At least three scenarios are possible for the regime’s future direction: to reform its economy and unify with South Korea; to collapse; or to stay the course (that is, to view the U.S. and the West as adversaries that need to be hedged against). The likelist direction, especially with the sister at the helm, is to stay the course.

The weird good news from the coronavirus is that the pandemic crisis might strengthen the American tendency toward military restraint. Moreover, the United States and China will want to prevent regime instability as much as possible. Intel agencies regard collapse in Pyongyang as worse than the status quo. What we do know is this: Without an official statement from North Korea, we do not know what Kim’s status is, and we cannot predict the future.

Devin Stewart is a senior fellow at Carnegie Council for Ethics in International Affairs in New York.