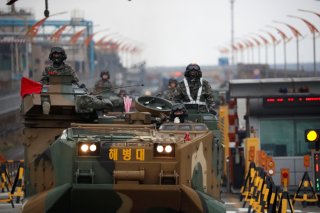 Arguments against South Korea's military conscription system abound. First, as CATO Institute scholar Doug Bandow has pointed out, the draft allows the government to secure enough “cannon fodder” while shifting “costs onto draftees.” According to the Gates Commission established by the Nixon administration, which recommended ending the U.S. military draft, conscripts, “compelled to render services to the government” at a negligible pay, are burdened with “a tax paid (and collected) in kind.”

The fact that South Korea ranks sixth in the world in active military manpower but sixty-second in maintenance fees per capita shows how much the military relies on personal sacrifices. The Institute for Democracy estimated that the opportunity costs incurred by draftees and society amount to almost $12 billion a year, adding that the current draft system shaves $12.5 billion off of South Korea’s annual gross domestic product (GDP). On the other hand, the Korean Association for Policy Development estimated that an all-volunteer force (AVF) would only cost approximately $4 billion extra.

The second criticism of South Korea’s military conscription relates to personal freedom. Conscription predicated on coercion and an unquestioning sacrifice for authority contravenes libertarian values fostered by a thriving economy and globalization. What Edward Chang described as “the more ‘liberal,’ individual liberty-minded form of citizenry” in America today applies to South Korea as well.

South Korea’s draft-age cohort is awash neither with the elation of independence nor a genuine fear for the safety of the fledgling republic that older generations felt. While more than two-thirds of those over the age of sixty favor conscription, almost two-thirds of those under thirty do not. Meanwhile, more than 80 percent of former draftees still in their twenties confided that they would have opted out of the military had it been possible. Between 2017 and 2021, more than 30,000 young men of dual nationality had deserted Korean passports specifically to shirk conscription.

Compulsion naturally diminishes the efficiency and zeal of the armed forces. Rookies are advised by their drafted superiors to feign ignorance when asked by officers about their skills, lest the officers consign more duties to them. Frequent conscript turnover also entails cost and time inefficiencies. I have seen and heard plenty of instances where officers swamped in work try to delegate minor tasks to draftees at hand, only to desist after learning there is little time left until their discharge.

The debate over whether South Korea should adopt an all-volunteer force has been active for quite some time. Modern warfare has shifted operational concepts and needs from labor-intensive foot soldiers to capital-intensive technology specialists. It is not North Korea’s guns and tanks but its nuclear capabilities and ballistic missiles that shape South Korea’s defense posture.

Yet, old habits die hard. In 1949, eight months after the birth of the Republic of Korea, its constitution adopted mandatory military service for all able-bodied men. Since the government did not have enough time to enforce the draft before the outbreak of the Korean War in 1950, a paltry regular army reinforced by ad hoc militias were insufficient to fend off North Korean aggression. After the war, an insistence on quantity over quality molded post-war military planning. Since then, the notion that South Korea needs at least 500,000 soldiers against North Korea’s 1,200,000 has become the mantra of the defense establishment.

However, a cratering population and rapidly depleting conscription pool have persuaded many in the defense ministry and academia that an AVF is not only inevitable but also desirable. South Korea already has the world’s lowest fertility rate, which Statistics Korea anticipates will plunge to 0.61 in 2025. Three years from now, there will not be enough young men to sustain the current conscripted proportion of 300,000. This demographic collapse is expected to peak in 2040, by which time the number of males between the ages of twenty and twenty-four will have more than halved. Most draftees enter the military at twenty, the age considered the cusp of manhood and an opportune moment for the rite of passage. In 2020, there were more than 330,000 men turning twenty, but the same year, less than 140,000 male babies were born. Given conscientious objection, mortality, emigration, and the conscription rate of 90 percent, there will only be around 110,000 men up for the draft in 2040.

The need for a more modernized military run by the specialized few, and a decreasing conscription population, has improved public opinion towards an AVF. In 2020, more than 60 percent of respondents to a poll by the Korean Broadcasting Systemfavored an AVF as an alternative to the draft. Last year, a Gallup poll revealed that people in every age bracket preferred an AVF, barring those over the age of sixty. Befitting the demographic drift, the issue of transitioning to an AVF loomed large on the campaign agenda of this year’s presidential candidates.

Overall, conscription seems senseless and untenable. However, South Korea needs to maintain the draft because it will not be ready to establish an AVF anytime soon. Even when an AVF appears timely and kicks into gear, South Korea should still mandate essential military and civilian training among the population.

The South Korean defense ministry’s National Defense Reform 2.0 plan intends to select and divert more officers to combat units aided by unmanned platforms and AI. In non-combat domains such as maintenance, logistics, and administration, it plans to hire more civilians. Yet, its rosy plan to pass defense responsibilities from drafted ranks to more specialized officers and civilians is unlikely to take off.

There will not be enough volunteers unless the military turns into an attractive employer. The number of applicants for the Reserve Officers’ Training Corps and Officer Candidate School dropped by 50 percent in 2020 from four years earlier. The application pool for NCOs also contracted by almost 35 percent over the same period. Plus, the military does not excel at retaining human capital. As more civilian volunteers leave the military and fewer civilians apply to join each year, the military falls short of its civilian quota. The ramifications are alarming. Take cybersecurity, for instance. Despite the indispensable role of cyber defense in safeguarding and operating high-tech munitions—the very foundation for an AVF—a whopping 93 percent of cyber officers eligible for contract renewal have left the military in the past five years.

Negative public perceptions of the military also lead South Koreans to rule out military service as a promising career. In 2019, Korea National Defense University found that more people distrusted the military than those who did not. The military’s problems are myriad and include irrational practices, perennial scandals and accidents, officers’ turpitude, bullying, and general incompetence. The grievances of professional volunteers who leave the military include low wages, non-guaranteed tenure and promotions, frequent relocation, and poor standards of living in remote villages.

South Korea’s military culture has stagnated due to a long-running reliance on conscripts as well as complacency among the top brass. The draft’s sole purpose today is to provide surplus manpower to compensate for the lack of advanced weaponry. Almost half of former draftees, however, admitted that they handled officers’ personal affairs. Even in their formal capacity, many draftees' service time is consumed by tasks unrelated to defense. This needs to change. So many posts can be streamlined, outsourced, or even dissolved, while a quarter of defense administration tasks can be completed by automation.

Patriotism and an aptitude for public service alone cannot entice citizens to don the uniform. The military has failed to successfully compete with other job openings and career tracks. However, no detailed planning, let alone a serious discussion, has emerged to redress structural plagues, establish incentives for volunteers, and integrate private outsourcing. South Korea is running out of time to change decades of negatively entrenched perceptions of the military to allure more volunteers. Not even a feasible rubric has been hammered out for a hybrid draft-volunteer system to fill the lower end of the enlisted hierarchy as a stopgap until an AVF is installed.

Fortunately, South Korea can look to the United States for how to secure civilian volunteers and private collaboration, address the different kinds of corruption and administrative ills to expect, and oversee and assess the efficiency of contracted services.

For now, South Korea has to make the best of what it has. Optimizing force distribution and entrusting soldiers with responsibilities that have a direct bearing on defense could buffer the impact of buckling demographics. Simultaneously, salvaging the military’s reputation is necessary to attract more volunteers before installing an AVF. A “veteran premium” that U.S. military personnel are given in post-service life does not apply to South Korean veterans. Rather, a “stigma effect” works against those skipping or failing their service since they are considered below par for not surviving the military. Adequate financial rewards and perks, better career outlooks, and nurturing pride and honor through more particularized and professional defense-related duties would gradually uplift the military’s image.