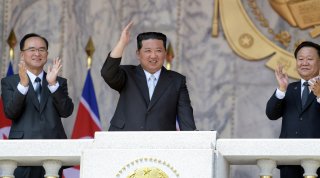 North Korean supreme leader Kim Jong-un visited the Kim Il-sung mausoleum in Pyongyang on Friday and attended a “national meeting and public procession” in the capital city’s Kim Il-sung Square, although he did not give a speech at the event. Instead, another senior official gave the commemorating remarks, claiming that North Korea would overcome any difficulties and triumph over its enemies, according to the state-run Korean Central News Agency (KCNA).

The government also held an evening gala in the center of the capital that included art exhibitions, concerts, and a light festival “artistically depict[ing]” Mount Paektu, North Korea’s traditional sacred mountain and the alleged native home of Kim Il-sung.

However, the absence of a military parade came as a surprise to many Western officials, who had predicted in the days leading up to the event that North Korea would use the opportunity to showcase its arsenal—or even conduct another missile or nuclear test.

Despite the absence of a parade, various indicators suggest that Pyongyang is preparing to hold one in the near future. NK News, a South Korea-based news site dedicated to covering North Korean politics, observed that satellite footage depicted soldiers conducting drills at the country’s Mirim parade training base. It also noted that there has been an increase in tire tread marks around a known heavy weapons garage, suggesting that the weapons systems within it had been taken out for practice in advance of a parade.

Observers have suggested that April 25, which marks the ninetieth anniversary of the founding of the Korean People’s Army, could be the date of the parade. “Since the two anniversaries are just ten days apart, it seems a bit difficult to hold a parade on both occasions,” Yang Moo-jin, a professor at the University of North Korean Studies in Seoul, South Korea, told AFP.