Is Trade Between China and North Korea Back On? 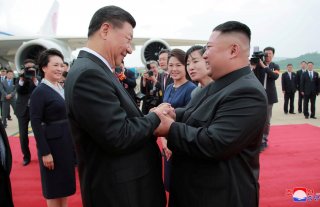 A recent report stated that trade between China and North Korea, which has been severely curtailed by the coronavirus pandemic, was on the verge of resuming.

Nikkei had stated that North Korea was getting set to get back to trading with China after a lack of Chinese goods wreaked havoc on North Korea’s sanctions-battered economy. That report also said that the first goods were likely to be transported over the Sino-Korean Friendship Bridge, between Dandong and Sinŭiju, on the North Korean side of the border, and that the long-delayed New Yalu River Bridge was on the verge of reopening. However, passenger cars were not going to be allowed to cross the border.

Another report at the same time, from Radio Free Asia, also indicated that the resumption of trade between China and North Korea was imminent.

But now, another report says that trade activities between the neighboring countries are unlikely to resume this month.

According to Daily NK, “North Korean officials have not yet allocated waku (trade certificates) needed for trade agencies and individuals to participate in state-sanctioned trade activities.”

The publication’s source said that while trade companies have finished the administrative process, official instructions have not yet been given by the Worker’s Party.

The process for receiving the wake approval typically takes about a month, meaning that trade is unlikely to resume this month. The process takes that long so that authorities can determine if the Chinese companies are linked to South Korea, Japan, or the United States. The companies who are found to have such links find themselves not able to receive the waku, or to participate in any type of trade in the future.

“Trading companies and business people who acquired waku in the past have been ordered to resubmit proposals so their certificates can be reviewed and reissued,” the report said. “However, even these applicants are still waiting for the document screening process to begin, indicating that the waku issuance process may take more time than it did in the past.”

“COVID-19 is the most important factor in the resumption of trade,” the source said, adding, “It can’t be said that the [COVID-19] situation in the country is good,” Daily NK’s source said.

North Korea has continued to claim, ever since the start of the pandemic, that it has zero cases of coronavirus, while at the same time taking active measures to prevent the spread of the deadly disease. However, that’s not a claim that’s been believed by international organizations, and the CDC continues to officially recommend that “travelers should avoid all travel to North Korea.”