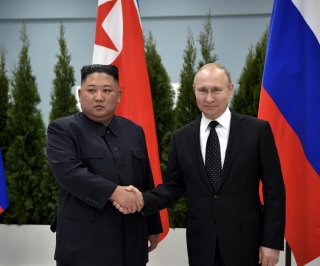 Ukrainian Foreign Ministry officials confirmed on Wednesday that the government had severed ties with North Korea after it announced its recognition of the Donetsk and Luhansk People’s Republics, the two breakaway territories in Ukraine’s eastern Donbass region, as independent nations—making Pyongyang the third government to do so, after Vladimir Putin’s Russia in February and Bashar al-Assad’s Syria in June.

“The Ministry of Foreign Affairs of Ukraine strongly condemns the decision of the Democratic People’s Republic of Korea to recognize the so-called ‘independence’ of the territories temporarily occupied by the Russian Federation in the Donetsk and Luhansk regions of Ukraine,” a statement issued by the Foreign Ministry read, using North Korea’s formal name. “We consider this decision as an attempt by Pyongyang to undermine the sovereignty and territorial integrity of Ukraine, a gross violation of … the UN Charter and the fundamental norms and principles of … international law.”

“The North Korean regime’s recognition … is null and void, will have no legal consequences and will not change the internationally recognized borders of Ukraine,” it added. “In response to such an unfriendly act, Ukraine announces the severance of diplomatic relations.”

Pyongyang’s decision to recognize Donetsk and Luhansk, which have fought an eight-year war against the central government in Kyiv with Russian support, was first published by Russia’s state-run TASS news agency. The news organization cited Donetsk leader Denis Pushilin and North Korean ambassador to Russia Sin Hong-chol, who it said had presented a document affirming the recognition of Donetsk ambassador to Russia Olga Makeyeva.

North Korea has consistently sided with the Kremlin during its ongoing invasion of Ukraine. It was one of five countries to vote against a UN General Assembly resolution condemning the invasion, alongside Russia, Belarus, Syria, and Eritrea.

Ukrainian foreign minister Dmytro Kuleba argued that the decision was more indicative of Russia’s “toxicity” than a genuine policy choice of the North Korean government, suggesting that North Korea had agreed to recognize the two breakaway proto-states in exchange for a reward from the Kremlin.

“Russia has no more allies in the world, except for countries that depend on it financially and politically,” he said—speculating that Moscow’s degree of isolation would soon be similar to Pyongyang’s as Western sanctions continued to mount.