A U.S.-North Korea Deal Could Include Partial Sanctions Relief for Yongbyon and a Nuclear Freeze 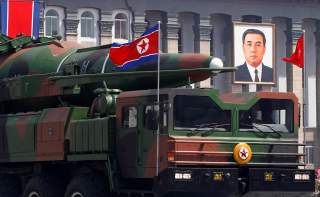 Washington rumor now has it that the Trump administration is considering offering North Korea some temporary sanctions relief for a freeze of its production of nuclear warheads and missiles. The mooted deal would also include the shutdown of North Korea’s best-known nuclear reactor, at Yongbyon. It does not, however, indicate what range missiles would be frozen. The latter matters to regional allies, especially Japan, which is threatened by shorter range missiles than North Korea would use to strike the United States mainland.

This substantiates further some of the ideas that were floated a few weeks ago,which centered around a freeze as a possible first step towards denuclearization. Republican “hawks” like National Security Advisor John Bolton rejected such an arrangement, but this new leak suggests a similar idea of a step-by-step process with the North. Bolton and others have sought a package deal, whereby North Korea would give up its entire nuclear and missile program in exchange for expansive but vague U.S. economic and security guarantees. North Korea was never going to accept that fantastical suggestion. It spent fifty years and countless billions from a backward economy clawing its way into nuclear status. Nuclear weapons insure Pyongyang against regime change efforts from hawks like Bolton. Any deal to give them up would have to partial, sequenced, slow, and very well compensated. And indeed, when President Donald Trump asked for the entire North Korean program at Hanoi a few months ago, the North Koreans said no and the summit collapsed.

Since then, it has been quite clear that any proposed U.S. deal would have to be more balance-positive to North Korea. Indeed, this has been the problem since the Trump first met North Korean supreme leader Kim Jong-un in Singapore in June 2018. The United States has been unwilling to offer much to North Korea—for obvious political reasons. No one wants to fold before a tyranny like North Korea. Hawks would attack Trump from the right, and possibly even the Democratic presidential candidates would attack him. And a decent deal for the North would undercut Trump’s hyperbolic denunciation of the Iran nuclear deal.

So for a year, the United States offered Pyongyang very little, instead just pounding its fists while demanding unilateral disarmament. Hence, the three Trump summits with Kim were just photo-ops. Now at least—perhaps out of sheer exhaustion, perhaps because Trump likes to style himself a dealer, or perhaps for electoral need of a foreign-policy victory for next year’s U.S. presidential campaign—the Trump administration is offering a more balanced deal, one that North Korea might actually consider.

The rumored deal is still pretty balance-positive for the United States. Trump is asking for a lot, albeit far less than before. Surrendering Yongbyon will not be too costly for the North; the facility is old, and the North has others—perhaps lots of others actually. The real bite will be the freeze, particularly on warhead production. The North is rumored to have hundreds of missiles of various ranges, but no more than seventy nuclear warheads. (These numbers are little more than guesses one hears on the conference circuit here in East Asia; no one really knows.) A freeze would halt production, which still means a pretty small Northern arsenal. For that reason alone, this is a good starter deal for the United States. A freeze at least stops the North Korean program in its tracks while we try to figure out what else we can swap with Pyongyang for a deeper, fuller deal. At least the North Korea problem would not worsen; that is progress.

Unfortunately, the sanctions relief offered by the United States is mediocre compensation. It is limited to coal and textiles, and it is impermanent. One could see the North Koreans rejecting this offer as too sparse. Indeed, my guess is that they will. Trump is bargaining from political weakness. The North can simply wait and wait. No one will attack it now that is nuked-up, and its elite has long demonstrated a willingness to ride out sanctions and push their costs onto the North Korean population. Trump, on the other hand, has made North Korea into his major foreign-policy effort, and he has little to show for it so far. He is ten points behind former Vice President Joe Biden, the Democratic presidential front-runner, in the polls. The pressure on Trump for a policy “win”—especially one as dramatic as a North Korea breakthrough—will only increase as the election looms. So if you are North Korea, then why take this deal now? Why not wait for Trump to feel the election heat, become more desperate, and offer better terms?

Finally, there is one other serious problem for the United States that has not received much attention. A deal involving only long-range or intercontinental missile production could well strike an alliance crisis with Japan, especially given the simmering Japan-U.S. trade tension. Japanese prime minister Shinzo Abe has flattered and worked Trump relentlessly, but Trump continues to badger Japan over trade in cars particularly. So a missile abandonment added to that could provoke a serious rift. Because South Korea is so close to North Korea and is already so vulnerable to its conventional retaliation—because the South’s largest, wealthiest, and most populous province abuts the inter-Korean border—South Korea will likely not object to a U.S.-North Korea deal which leaves short-range missiles. They do not add too much more onto what is already a huge North Korean threat. The real sticking point is Japan and the North’s medium-range rocketry.

This deal is good starting point if Trump can get it. At least it would halt the program and keep the problem from getting even worse. But it has a lot of problems too: It would require inspectors in North Korea to verify, a huge follow-on problem to tackle. The North may not go for it. The North’s extant missile and warhead capacity would remain untouched and unverified. Japan may well deviate from the United States on East Asian security if it feels like it is being left alone to face North Korean nuclear missiles. But at least the Trump administration is finally getting serious about dealing with the North. That is progress.