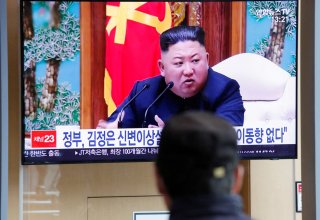 North Korea has been the subject of a great deal of speculation in recent weeks. With the disappearance of Kim Jung-un from public life, many rumors flowed as to what had happened to him and where he was. These rumors came from not only the international press but from those in academia and even policymakers in South Korea. There were reports that he had undergone heart surgery, that he may have been injured observing an exercise, and even reports that he may have been simply “laying low” due to the coronavirus that was hitting his country (though North Korea continues to deny this is a major issue). None of these reports have proven to be true to date (though any of them remain a possibility). So far, Kim Jong-un made a public appearance at a fertilizer factory after nearly a three-week absence that proved (at least for now) that he is healthy and in charge.

The recent clamor over Kim Jong-un’s disappearance raises an important question—even if there were no health issues involved. How would the succession process work if he were to die suddenly? Many have opined that his sister Kim Yo-jong would be the successor, though others have stated this would be unlikely because she is a female. Both opinions are logical. Women do not generally hold leadership roles in North Korea, but if there is no one else to take the mantle of leadership in the communist state it is nonetheless a possibility. Kim Jong-un’s uncle, Kim Pyong-il, has also been mentioned as a successor, though he has lived outside of the country for many years after being passed over for leadership of the DPRK in favor of his half-brother, Kim Jong-il. Both the uncle and the sister remain possible candidates if North Korea is to continue the dynastic form of government that has existed since the founding of the country. If this were to turn out to not be the case, it would mean that for the first time in its history a non-family member would be the leader of the DPRK.

In order to understand how a new leader takes power in North Korea, one must understand the three pillars of power there. The party, the military, and the security services house the institutions that broker power in North Korea. There are power brokers in all three of these pillars, yet only Kim Jong-un brokers power in all three—and they answer directly to him. Thus, whoever leads North Korea after Kim Jong-un’s death must build a power base in all three of these pillars of power. This is how it was done with him following his father’s health issues that occurred in 2008-2009. At the time this was considered a short time period to build a power base (since his father died in 2011). Whoever the person is waiting in the wings to take over the country, it is vital that he or she builds a power base within the key institutions that control everything in the country. This has not happened yet.

The descriptions above point to an interesting assessment. With no clear leader being “groomed” for power yet, the possibility for instability in the case of Kim Jong-un’s death is very real. In fact, it would be a “perfect storm.” An unstable power structure in North Korea would be exacerbated by the effects that the COVID-19 virus is having nationwide (including in Pyongyang). Thus, it is likely that the leadership in North Korea will now begin in earnest, a plan to build up the power base for the “next Kim” (if it turns out to be a Kim) to lead the country. Failure to do so could lead to large-scale instability or even collapse.