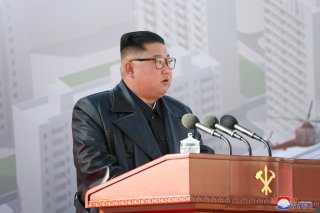 On March 21, Kim Yo-jong—North Korean leader Kim Jong-un’s sister and senior policy adviser—broke the news that President Donald Trump sent a personal letter to her older brother about the prospect of cooperating against the coronavirus pandemic sweeping the world. Trump confirmed the letter himself a day later at the White House, stressing that the United States was willing to help other governments—even the government in Pyongyang—deal with a virus that has killed thousands of people and locked down entire countries. The letter was widely ridiculed at the time as yet another meaningless jester from Trump and an attempt by the administration to use the coronavirus to maximum political effect. But the offer was nonetheless a small unclenching of the fest (one former U.S. Ambassador to the U.N. Bill Richardson has advocated for), a half-hearted effort by a president who is desperately in need of a foreign policy victory as he prepares for a grueling re-election battle.

Unfortunately, U.S. policy on North Korea has always suffered from the same cocktail of failings: misplaced assumptions about how North Korea will react to economic, political, and military pressure; a myopic understanding of the Kim regime’s motivations; bad luck; misplaced timing; extreme cynicism about Pyongyang's willingness to abide by an agreement; and internal divides in Washington about what the strategy should be. The last factor is especially acute in the Trump era, where the president often appears at odds with his more establishment-oriented national security advisers.

The North Koreans don’t take kindly to threats of any kind, whether they come in the form of words uttered through the microphone or B-2 bomber flights over the Korean Peninsula. The Kim regime overreacts to the slightest negative remark from a U.S. official, which is, of course, a reason why U.S. officials should be responsible with their public comments. Secretary of State Mike Pompeo, America’s top diplomat, has a hard time being diplomatic, a tact that involves constant and tedious efforts to be careful with what you say and how you say it. Pompeo’s urgings on North Korea after last week’s G-7 foreign ministers meeting, where he called for the body to maintain the economic and political pressure for as long as Pyongyang maintained its “illegal” nuclear weapons and ballistic missile programs, was not what the North Koreans wanted to hear—not by a long shot.

It took a few days before the North Korean Ministry of Foreign Affairs replied to Pompeo. The ministry didn’t bother with the niceties. Pompeo "seriously impaired the signboard of dialogue put up by the U.S. president as a decoy to buy time and create the environment favorable for himself,” the MFA’s new director for American affairs told state-run KCNA. “The call for dialogue, a scheme of the U.S. President to lure us and earn favorable time and circumstances for himself, has been seriously damaged through [Pompeo’s] ludicrous remarks.” Pyongyang’s message is, in essence, easy for the blunt-talking Trump to understand: ‘we are tired of your word games and your duplicitousness  You aren’t serious about dialogue. And you have completely wasted our valuable time.’

To many North Korea watchers, the MFA’s March 30 statement is just one more illustration of Pyongyang’s fickleness and brazen paranoia. Coming on the heels of four ballistic missile tests this month—including a March 20 exercise where two projectiles splashed in the waters between the Korean Peninsula and Japan after a 143-mile flight—the Kim regime’s response to Pompeo is less groundbreaking news as it is a reaffirmation of what so many have already concluded: the personal diplomacy between Trump and Kim that looked so promising on the surface is now for all intents and purposes dead in the water. Trump wouldn’t have told his advisers to hold off on another summit until after the election if he didn’t conclude that the entire effort holds little political upside for him in an election year.

The mainstream media likes to simplify U.S. diplomacy with the North as a contest of wills between two individuals in Donald Trump and Kim Jong-un. The headlines have a tendency to be overly dramatic and sensationalized, as if East Asia’s entire fate will be determined by who wins this power struggle. It’s the type of zero-sum, good vs. evil tale that sells newspapers and attracts subscribers.

But the Trump-Kim dynamic is but one chapter in a much more complicated and unremarkable story of two adversaries who can’t seem to get out of each other’s way, are stuck in the old ways of thinking, and are completely devoid of diplomatic creativity. Both sides are unwilling or unable to explore bold moves that would move the negotiation forward, and neither is willing to run the political risk of being the first to budge from its entrenched position.

Commentators will harp about Donald Trump's starring role in this diplomatic melodrama. The president, of course, deserves a fair share of the blame for the lack of diplomatic movement. Trump may have been willing to throw the tactical rulebook on North Korea in the trash and meet with Kim personally despite protests from his advisers. But a change in tactics doesn’t add up to a change in strategy, one that still centers on squeezing Pyongyang’s economy until Kim comes to his senses and signs a surrender document otherwise known as final, fully-verified denuclearization. The Trump administration, like the Obama and Bush administrations before it, can’t countenance anything short of surrender as an acceptable outcome—a dastardly mistake that merely hardens the North Korean nuclear problem.

Forget about Trump, Kim, Pompeo, John Bolton, or any other individual. The real story is that what Washington views as sensible, Pyongyang views as imbecilic and potentially suicidal. Unless one or both discover the courage and good judgment to break the mold, U.S. and North Korean officials, from Trump and Kim down to the grunts, will be spinning their wheels.

Daniel R. DePetris is a columnist at the Washington Examiner and a contributor at the National Interest.