Yes, a Deal with North Korea Is Still Possible This Year 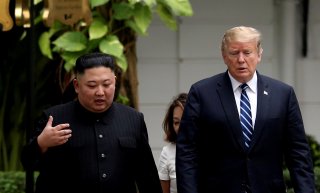 The reports of my death are greatly exaggerated, Kim Jong-un might say. The same could be said for nuclear diplomacy with North Korea.

Why? Diplomatic give-and-take is the only way for the United States to constrain North Korea’s nuclear and missile programs.

It is also the only way for Kim Jong-un to realize his grandfather’s goal of reducing his country’s security and economic growth dependence. Kim Il Sung had played off the Soviets against China throughout the Cold War, but in 1988, anticipating the collapse of the Soviet Union, he reached out to the United States, South Korea, and Japan in an attempt to end enmity and hedge against a rising China.

There is evidence that the North was determined to reconcile. In 1991, before it had any nuclear weapons,  it stopped reprocessing to extract plutonium, the only way it then had to generate fissile material to make them, in an attempt to open talks with Washington. It signed the Agreed Framework in 1994, verifiably shutting down its plutonium program and did not reopen it until 2003. It agreed to shut down that program again in 2007 in six-party talks.

In 1997, however, when Washington was slow to “move toward full normalization of political and economic relations,” as it had pledged in the Agreed Framework, Pyongyang began acquiring the means to enrich uranium, another way to make fissile material but kept its plutonium program shuttered. It also balked at initially implementing the 2007 accord after Washington imposed sanctions designed to bar its access to international financial institutions, and resumed fissile material production when South Korea, with U.S. support, halted delivery of promised energy assistance.

In 2017, Kim Jong Un opened the way to the first-ever US-DPRK summit meeting by suspending tests of nuclear weapons and longer-range missiles – stopping short of developing a proven thermonuclear device and an ICBM equipped with a reentry vehicle.

President Trump never quite reciprocated. At that Singapore summit, he suspended joint military exercises with South Korea – only to resume them soon thereafter, albeit scaled back.

So why have negotiations stalled? The trouble began with the February 2019 Hanoi summit when both parties overreached, demanding too much and offering too little in return.

In the run-up to Hanoi, secret talks began to sketch out a first-phase deal. The Trump administration proposed to exchange liaison offices as a step toward diplomatic normalization and approved some exemptions from U.N. sanctions. In pivotal talks with Kim Jong-un in October 2018, then-CIA Director Michael Pompeo committed to accepting an end-of-war declaration paving the way to a peace process in Korea. Kim, in response, offered “dismantlement and destruction of North Korea’s plutonium and uranium facilities ... and more,” according to U.S. negotiator Stephen Biegun.

On the eve of Hanoi, the North’s negotiators fell short of what Kim had offered and asked for substantial relief from U.N. sanctions. They opened the door for National Security Adviser John Bolton’s “Libya solution”: complete denuclearization as well as the elimination of the North’s chemical and biological weapons first, with “a very bright economic future” to follow. A North Korean attempt to clarify its stance on denuclearization failed to head off an abrupt U.S. departure from Hanoi

In the immediate aftermath. pushback came from those in Pyongyang opposed to engagement with Washington, leading Kim, in an April 12, 2019 speech, to harden his negotiating position and hint at ending his unilateral restraint on longer-range launches and nuclear tests, a step he has yet to take. While saying he was still open to negotiation, he raised the barrier to entry, demanding unilateral U.S. steps to reciprocate his test moratorium. He then presided over tests of short- and intermediate-range missiles.

In subsequent meetings in Panmunjom and Stockholm, the Trump administration offered more sanctions relief and refrained from large-scale or provocative exercises, but it did not allow North Korea exports of textiles and coal or suspend field exercises for a time or commit to what Pompeo once called “a fundamentally different strategic relationship” or security partnership.

These measures are a lot to ask, but if President Trump wants a significant foreign policy success, he may be prepared to offer them upfront, and Kim, if he does not want to abandon his grandfather’s goal of reconciliation, can put his test moratorium and his pledge to dismantle his plutonium and enrichment facilities in writing.