‘Entire Muslim World’ Will Recognize Israel if It Returns to 1967 Borders: Saudi Arabia 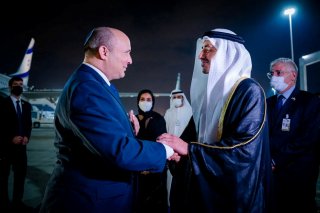 In an interview with Arab News, Abdallah al-Mouallimi, Saudi Arabia’s United Nations ambassador, claimed that the “entire Muslim world” was ready to recognize Israel and establish diplomatic relations with Tel Aviv if it agreed to withdraw to the territory it held on June 1, 1967.

On that day, Israel entered the Six-Day War against Egypt, Syria, and Jordan, its three largest neighbors, and decisively defeated them, capturing the Sinai Peninsula, Golan Heights, West Bank, and Gaza Strip. Although it returned the Sinai to Egypt in 1979 and officially annexed the Golan Heights in 1981, the status of the West Bank and Gaza Strip, particularly the former, has remained contentious. Although Israel agreed in principle to the creation of a Palestinian state in those territories, it has also maintained settlements there, prominently in East Jerusalem and along the Jordan River to the east.

The Saudi ambassador’s offer is not new—in essence, it is the same offer that was made during the “Arab Peace Initiative” in 2002. Al-Mouallimi acknowledged this during the interview:

“The official and latest Saudi position is that we are prepared to normalize relations with Israel as soon as Israel implements the elements of the Saudi peace initiative that was presented in 2002,” he said.

The Arab Peace Initiative plan calls for Israel’s return to the 1967 borders and for the creation of an independent Palestinian state with East Jerusalem as its capital. “As soon as that happens, not only Saudi Arabia, but the entire Muslim world, all fifty-seven countries of the OIC [Organization of Islamic Cooperation], would follow suit in terms of recognizing the State of Israel and establishing relations,” Al-Mouallimi said.

Israel has rejected the Arab Peace Initiative in the past, rejecting its insistence that Palestinian refugees be allowed to re-emigrate into Israel. A domestic constituency within Israel has also strongly opposed the dismantling of Israeli settlements within the West Bank and East Jerusalem, citing the precedent of the country’s 2005 withdrawal from the Gaza Strip, which paved the way for its takeover by the Hamas militant group, which is designated as a terrorist organization by the United States.

Around thirty nations, overwhelmingly Muslim-majority and mostly Arab, have never recognized Israel. After the Six-Day War, the Arab League’s 1967 summit in Khartoum, Sudan, led to a resolution proclaiming that there would be “no peace with Israel, no recognition of Israel, [and] no negotiations with it” for the duration of its existence.

Khartoum, however, was one of four Arab capitals to recognize Israel in 2020, alongside the United Arab Emirates, Bahrain, and Morocco.

Although Saudi Arabia has never recognized Israel, the two nations have engaged in increasing security cooperation against their mutual adversary, Iran, and there was significant speculation that Saudi Crown Prince Mohammed bin Salman would push the kingdom to recognize Israel in 2020. Ultimately, however, Saudi officials demurred, repeating the argument that the Palestinian issue should be resolved diplomatically first.