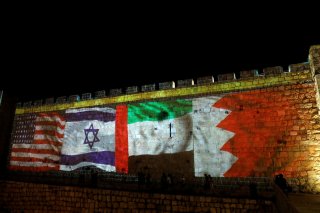 Arabs who would make peace with Israel, whatever their motives, will face backlash and must be courageous. The peace agreements between Israel and the Gulf states of the UAE and Bahrain represent a new model for Arab-Israeli peacemaking and must receive strong U.S. support to be sustained and replicated in the region. This article proposes three ways for Americans to show that support.

The examples of Egypt’s Anwar al-Sadat and Lebanon’s Bashir Gemayel, both assassinated after signing peace agreements with Israel, are well known. Lesser known is Ali Salem, an Egyptian playwright and newspaper columnist who decided to visit Israel in 1993, after the Oslo Accords between Israel and the Palestine Liberation Organization. His subsequent book A Drive to Israel, maybe the only humorous account of Arab-Israel contacts, was an Arabic bestseller. But it got him banned by the Egyptian professional unions. No one would publish his writing or stage his plays. Ali Salem wasn’t assassinated, he continued to live in a quiet Cairo neighborhood. But he lost his livelihood and professional reputation for normalizing with Israel. And he became an object lesson for other Arabs who might be curious about their Israeli neighbors.

In the last two months, with the signing of peace agreements between Israel and the Gulf states of the United Arab Emirates and Bahrain, we have witnessed the first major breakthrough in Middle East peace in over twenty-five years. These Israel-Gulf agreements are important both for strengthening U.S. allies and for providing a new model of future Arab-Israel peace.

The old model, represented most concretely in the Arab Peace Initiative of 2002, requires that Israel first conclude a comprehensive peace agreement with the Palestinian Authority before other Arab countries normalize relations with Israel. This model hasn’t produced results for decades for various reasons, despite intense international engagement with all of the regional parties. The new model reverses the sequence: Arab normalization with Israel comes first and is used to give new leverage to promote Israel-Palestinian peace. The old model assumes normalization was a one-sided benefit to Israel, only to be conceded once Israel meets the needs of the Palestinian Authority. The new model assumes normalization benefits both Israelis and Arabs, and that Arab engagement with Israel will help achieve a Palestinian-Israeli peace agreement.

Competition is good, one might say: stand back, allow multiple models to compete and let the best one prevail. But we are talking about the Middle East where every positive step can lead to a violent reaction and two steps back. The United States must actively back the new model to ensure its sustained success.

The backlash against the new model is taking different forms. The Iranian Revolutionary Guard issued a threat that the UAE leadership faces a “dangerous future.” Turkish President Tayyip Erdogan threatened to break Turkey’s ties with the UAE. The Hamas government in Gaza jailed three Palestinian peace activists for organizing a video call with Israeli youth.

Signals from think tanks and lobby groups of the American foreign policy establishment, which host advisors to the Biden campaign, are also a form of backlash. After criticizing the Trump peace plan as naïve and counterproductive, these figures cautiously welcomed the Gulf agreements with Israel that resulted from that plan. But they downplayed the agreements in order to avoid praising a Trump achievement and to maintain adherence to the old model of Palestine first. The establishment discourages other Arab countries from seeking normalized ties, for instance, telling Sudan it should wait until getting a popular mandate to normalize with Israel. (Of course, none of the prior Arab leaders who signed peace agreements with Israel had popular mandates to do so.)

What can we in the American public do to weigh in on the side of helping Israelis and Arabs achieve peace through engagement and normalization? Here are three ways.

First, shine a light on anti-normalization practices of Arab governments by calling on Congress to pass a new bipartisan bill introduced by Senators Cory Booker (D-NJ) and Rob Portman (R-OH). This law would require the State Department to add to the annual human rights report instances of Arab government retribution towards citizens who engage in people-to-people relations with Israelis. Such retribution is unfortunately the law and practice throughout the Arab world. We can support courageous individuals like the Egyptian playwright Ali Salem, but first, we need to know about them. This law requires the State Department to make such people-to-people contacts a priority.

Second, invest in making the UAE and Bahrain deals successful for all three countries and therefore an attractive model for others in the region. The potential between Israel and the UAE—the two most dynamic economies and societies in the Middle East—is enormous. For example, my Israeli students at Shalem College in Jerusalem offered some creative new proposals in a course on the Gulf countries this spring. Their final papers included proposals for joint UAE-Israel space research (both countries have advanced programs), joint production of television serials in Arabic using Israeli Arab and Jewish actors, a fusion Israeli-Gulf culinary exhibition and restaurant, and a Saudi-UAE-Israel free trade zone and tourism venture in the Red Sea. There is no shortage of good ideas, some are underway. The United States should jumpstart this potential by organizing private investment funds and by using our regional embassies to do Israeli-Gulf partnership deals.

Third, insist that our leaders support this new model as a bipartisan priority of the United States and not allow it to stay trapped in the bitterness of U.S. domestic politics. This doesn’t mean abandoning the Palestinians, but rather means more engagement with them as other Arabs normalize with Israel. The go-slow signals emanating from the American foreign policy establishment should not become the policy of a future Democratic administration. Only leaders can make clear this priority and Joe Biden should do so now.

The United States has an exciting new initiative for Middle Eastern peace that benefits U.S. national interests in the region by supporting our allies. This is true regardless of which party is in the White House. Expanding normalization to new countries will require continued U.S. diplomacy at the highest level, and we must ensure that this initiative doesn’t fall into partisan cracks. The best way of containing anti-normalization backlash is through making support for projects under the Israel-UAE and Israel-Bahrain agreements a bipartisan top priority in the Middle East.

Bob Silverman is a former senior US diplomat and President of the American Foreign Service Association, and lecturer in Middle Eastern Studies at Shalem College in Jerusalem.