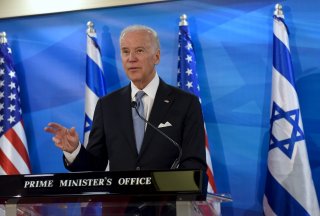 Israeli annexation of West Bank territories “would not be on the table” under a Joe Biden administration, retired U.S. diplomat Dan Shapiro told an audience of pro-Israel Democrats.

Israel had been planning to annex its settlements in the disputed Palestinian territories as part of an Israeli-Palestinian peace deal sponsored by U.S. President Donald Trump, although the plan was suspended last week as part of a diplomatic deal between Israel and the United Arab Emirates.

Shapiro, who served as U.S. Ambassador to Israel from 2011 to 2017, said on Tuesday that it “marks the end of the discussion of unilateral annexation of parts of the West Bank.”

Biden’s victory would then be an opportunity to “shelve” other parts of the Trump plan, Shapiro claimed, and return to the “traditional” U.S. role in pushing for two separate states for Israelis and Palestinians.

The retired ambassador was speaking at a video conference organized by Democratic Majority For Israel, a group that had helped Biden overtake progressive firebrand Sen. Bernie Sanders (I–Vt.) in the Democratic presidential primary race.

All of the Democratic candidates supported the two-state solution, but several had bucked long-time party consensus and floated the idea of putting conditions on U.S. aid to Israel to force progress on the Israeli-Palestinian issue.

“We cannot give it carte blanche to the Israeli government,” Sanders had said in 2019.

Biden’s advisors have ruled out any conditions on aid.

Shapiro emphasized that the recent Israeli-UAE deal would help put “positive pressure” on the Palestinians to come to the table, and fulfilled a “long-term bipartisan goal for the United States.”

Biden advisors Jake Sullivan and Tony Blinken have vowed to return to the 2015 nuclear deal if Iran agrees to, but Shapiro said that it is “very questionable whether Iran will be able to come back into compliance.”

Trump had left the deal, which had put limits on Iran’s nuclear program in exchange for economic sanctions relief, in 2018. The Trump administration then embarked on a campaign of “maximum economic pressure” meant to weaken the Iranian government.

“We have to acknowledge the success” of the pressure campaign, Shapiro said.

Any new diplomacy with Iran would use “forms of pressure, including sanctions,” in order to get concessions on non-nuclear issues, he concluded, and the Israeli-UAE deal was born from an “alignment of regimes and governments in the region” to “help with the isolation of Iran.”