Belarus Will Send Troops to Support the Russian Military in Syria 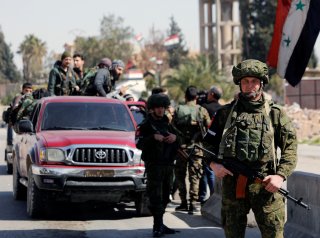 A Russian government document released on Monday revealed that around 200 Belarusian troops would be deployed to Syria alongside Russian soldiers.

The report, negotiated between the Russian and Belarusian foreign and defense ministries and approved by Russian prime minister Mikhail Mishutin, indicated that Belarusian forces would be deployed to provide “humanitarian assistance” to Syrian civilians. It indicated that they would be placed under the operational control of the Russian military, ultimately receiving commands from Moscow rather than Minsk.

Russia’s intervention in Syria in 2015 is often credited with having saved the regime of Syrian president Bashar al-Assad, whose struggle to remain in power has now entered its tenth year. Assad also received substantial support from Iran and its foreign proxy forces, including Hezbollah, which sent thousands of troops to his aid over the course of the conflict.

Outside support for Assad was critical in strengthening his regime after the initial successes of the rebellion and the rise of the Islamic State terror group. Although Islamist rebels still control Syria’s northern Idlib province, and much of the country’s north and east is divided between Turkish-backed militias and an autonomous Kurdish government, Assad’s control over most of the country has been solidified. As a result, some Arab countries have recently opened negotiations with Damascus for recognition and commercial ties.

The Belarusian deployment to Syria reflects Minsk’s increasing security partnership with Moscow and Belarusian leader Alexander Lukashenko’s growing ties with Vladimir Putin. Although there is considerable personal enmity between the two men, Russian and Belarusian military cooperation has significantly expanded since 2020, and the Kremlin has helped support Lukashenko’s position in power after the onset of a nationwide protest movement in Belarus in mid-2020.

That protest movement, which began after Lukashenko announced that he had been reelected over opposition candidate Sviatlana Tsikhanouskaya in an election marred by massive irregularities, saw the imposition of substantial Western sanctions, leading Lukashenko to look eastward for political and financial support. In February, the Belarusian leader announced that he would host Russian forces for an upcoming series of military exercises that some fear is related to Russia’s recent buildup of its forces along its border with Ukraine.

In an apparent reaction to Russia’s fears over the eastward expansion of NATO, Lukashenko also announced in November that he was willing to host Russian nuclear weapons within Belarus.

From her exile in Lithuania, Tsikhanouskaya strongly criticized the Syrian deployment, describing it as a naked attempt to curry favor with Moscow.

“Lukashenko is paying with Belarus’s sovereignty for the support he received in 2020 that helped him stay in power,” the opposition leader said in remarks to the AP.