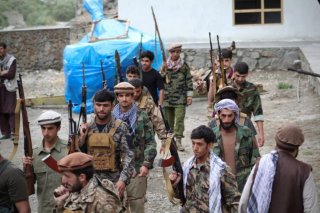 Days after cutting off the region’s telephone and Internet access, the Taliban has launched another series of attacks on the last remaining area of the country outside their control, the Panjshir Valley in northeastern Afghanistan. The valley is occupied by the “National Resistance Front,” (NRF) led by Ahmad Massoud, son of legendary guerilla commander Ahmad Shah Massoud, and Amrullah Saleh, Afghanistan’s former Vice President under President Ashraf Ghani. Following Ghani’s departure for the United Arab Emirates in mid-August, Saleh proclaimed himself caretaker president of Afghanistan, although in practice the internationally recognized Afghan government has ceased to exist.

While negotiations remain ongoing between the Taliban and the Panjshir resistance, and both Massoud and Saleh have expressed willingness to compromise if a multi-party government could be formed. However, an agreement seems unlikely to be reached. The Taliban have surrounded Panjshir and brought heavy equipment to the region, utilizing their advantage in numbers and equipment in their offensive. The situation on the ground remains unclear, and each side has claimed victories over the other.

A TRT reporter stated that the Taliban had attacked the valley from Andarab, to the valley’s south, and Badakhshan, to its north. Taliban spokesmen have described the offensive as largely successful, claiming that its fighters had entered the valley.

The Panjshir resistance, however, has denied this. “There is no fight in Panjshir and no one has entered the province,” Panjshir spokesman Mohammad Almas Zahid told TOLO News, an Afghan news channel.

Ali Nazary, the NRF’s head of foreign relations, tweeted that a Taliban attack had been driven back with the destruction of many of the group’s armored vehicles. The same statement claimed that the Taliban had retreated from Gulbahar to Charikar, capital of Afghanistan’s Parwan province—an area that Massoud’s forces had briefly captured earlier in August, only to retreat after Taliban reinforcements arrived.

The Panjshir resistance reportedly has between 7,000 and 20,000 troops defending the valley, including heavy equipment and Afghan special forces formerly in the now-defunct Afghan National Army.

While some U.S. officials, including Rep. Mike Waltz (R-FL) and Sen. Lindsey Graham (R-SC), have advocated for political and military support for the Panjshir resistance, the Biden administration has made no steps toward doing so. The conventional wisdom suggests that the U.S. will attempt to build up its relations with the Taliban, rather than undermine it by backing Massoud and Saleh.