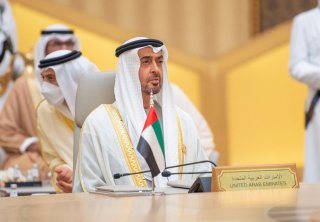 The U.S. policy of “security for oil” has remained the prime source of defense for the Gulf states. Throughout the Cold War, the United States remained focused on Middle Eastern security to contain the Soviet expansion in the region. After the collapse of the USSR, the persistent U.S. presence in the region was attributed to the goal of preventing the rise of rogue states, militant non-state actors, and anti-American sentiments in the predominantly Muslim region. However, such a policy backlashed, throwing the region into the flames of civil war, sectarian clashes, and more violent terrorist activities, resulting in the loss of local and American lives—both civilian and military. During the Obama and Trump administrations, the United States transformed its regional policy to one of “leading from behind,” disassociating itself from the regional chaos. Nevertheless, recent efforts by the Biden administration to re-engage with the region through the Middle East Air Defense Alliance (MEAD) may have far-reaching implications.

MEAD is expected to integrate the Gulf’s security with Israel. Among all the Gulf states, the United Arab Emirates (UAE) is the most likely to benefit from such an alliance. First, the UAE is the only Gulf state to be a member of the I2U2 framework, which is headed by the United States and is often described as the “Middle Eastern Quad.” Officially, I2U2 aims to promote economic integration, political cooperation, and non-traditional and maritime security between its four members—the United States, the UAE, Israel, and India. Therefore, as Abu Dhabi is already part of a U.S.-led framework and closely cooperates with Israel, it would be a pivotal state in any regional security alliance. Second, as compared to the other Gulf States, especially Saudi Arabia, the UAE has made more significant technological and military advancements. In 2019, the UAE inaugurated the first ever commercial nuclear power plant in the Arab world, while in 2021, it became the first Middle Eastern state to send a space probe to Mars.

In addition to these scientific developments—most of which are foreign-sponsored—the UAE has also shown interest in purchasing F-35 fighter jets from the United States. Although the F-35 deal has fallen into jeopardy due to American concerns about the UAE’s economic collaboration with China, the regional security framework could work for the United States by enforcing its reservations regarding China. Lastly, unlike Saudi Arabia, the UAE is a more active regional player. Emirati military influence in the affairs of Yemen, Libya, and Somalia makes its defense industry more equipped, translating into regional strength that Riyadh lacks. Therefore, MEAD would further assist the UAE in consolidating its pivotal position in the Middle East.

The dilemma faced by Israel—its hostile neighborhood—is also expected to be reversed. Since the Abraham Accords, Israel’s engagement with the wider Middle Eastern region, especially with the Arab world, has increased. In fact, being a member of I2U2 provides Israel the impetus for political, economic, and defense cooperation with the Arab world. It also reflects Israel’s desire for enhanced strategic depth through its presence in the eastern Indian Ocean. Linked to these factors are Israel’s apprehensions about Iran and the latter’s strategy of encirclement. Among all the anti-Iran states in the region, Israel is the most vulnerable to Iranian attacks. In fact, it was Israel that vehemently opposed the Iran nuclear deal, or the Joint Comprehensive Plan of Action (JCPOA), as it didn’t address the threat of Iranian missiles. Israel also blames Iran for transferring these missiles to Hezbollah and Hamas, which are a strong deterrent against any Israeli expansion. In fact, Hamas and Palestinian Islamic Jihad (PIJ) launched over 4,000 rockets against Israel in the eleven-day crisis in May 2021. Although Israel has developed its Iron Dome missile defense system to intercept the rockets fired by Hezbollah and Hamas, the number of rockets that they can fire simultaneously is far beyond the Iron Dome’s capabilities. Since other states, particularly those in the Gulf, share similar reservations towards Iranian missiles and proxies, a collective air defense pact would allow Israel to become the frontrunner in regional security proceedings and overturn its encirclement by Iran.

MEAD is already being labeled as the Middle Eastern NATO. Previously, I2U2 was called the Middle Eastern Quad. In the global structure, both the expansion of NATO and the Quad (further complemented by the establishment of AUKUS in August 2021) provoked aggressive responses from Russia and China, respectively. While Russia has invaded Ukraine, China has been more assertive in the South China Sea (SCS).

Owing to these developments, Eastern Europe and the Indo-Pacific have become the new arenas for global power competition. In the context of the Middle East, it is Iran that faces the direct consequences of any U.S.-led security arrangement in the region. Already being viewed as an anti-Iranian alliance, MEAD caused resentment within Iranian policy-making circles. Shortly after news of MEAD broke, Kamal Kharrazi, a senior advisor to Iran’s supreme leader, said Iran “has the technical means to produce a nuclear bomb.” Such a statement from a senior official represents two motives: Iran’s lack of interest in the Vienna talks and its willingness to change its non-nuclear status. If MEAD is formally launched, the nuclear talks would eventually be suspended. In order to counterbalance MEAD, Iran will likely further increase and sophisticate its missile stockpiles, resulting in an arms race in the region. Furthermore, the association of the Gulf states, particularly Saudi Arabia and the UAE, could lead to the failure of peace talks between Iran and the Saudis, while also affecting economic and energy cooperation between Iran and the UAE.

This change in U.S. policy occurred for two major reasons. First, the military and economic advances of Russia and China began to overshadow America’s traditional influence in the region. While the United States minimized its defense commitments to the Gulf states, Russia became more militarily active in Syria. In a similar manner, since America’s dependence on Middle Eastern energy sources has declined, China’s economic and energy cooperation with the Gulf states has surged. Iran provided major breakthroughs for both of Washington’s competitors. In the Syrian Civil War, Iran closely coordinated with Russia to target anti-Assad militants. In the economic sector, Iran and China reached a $400 billion investment deal. Both these developments emboldened Iran to further increase its clout in the region while avoiding U.S. sanctions. So far, both Russia and China have avoided taking sides in regional competition.

Nevertheless, the creation of MEAD—if accomplished—could bring the global power competition back into the Middle East. Since Israel and the Gulf would be closely aligned with the United States on security terms, Russia and China would inevitably try to enhance their cooperation with the anti-U.S. actors in the region—Iran and its proxies.

The Russo-Ukrainian War has made the Middle East significant for the United States and its allies once again. However, MEAD is being seen as a provocation by the United States, causing serious reservations from both allies and foes. First, from Europe’s perspective, as much as the European powers are eager to integrate Israel into the Middle Eastern security framework, they fear MEAD will jeopardize the Iran nuclear talks. Europe desires the revival of JCPOA to secure an alternative energy market amid the ongoing energy crisis. Although the Gulf states have promised to increase their oil production, they cannot produce much more. Therefore, Europe may not endorse MEAD.

Second, from the Iranian viewpoint, arming anti-Iranian states and enhancing their deterrence capabilities is a grave provocation that could further intensify Iran’s missile program. If this happens, rapprochement between the United States and Iran could be stalled amid renewed great power competition in the Middle East.

Third, after the Iranian triumph in Syria and Yemen, where Iranian-backed actors gained the upper hand, many Gulf states, including Saudi Arabia and UAE, engaged in peace talks and some degree of cooperation with Iran. This development could be transformed into a regional security order. However, MEAD may undermine this. Fourth, the reentrance of the United States in the Middle East may unleash an intense global power competition. Previously, whenever the United States participated in regional security initiatives, it benefitted from the absence of any global challenger. However, at present, both Russia and China have gained inroads in the Middle East. The U.S.-led MEAD could be a threat to their regional objectives; therefore, a strong response is inevitable. Fifth, Biden’s shift toward the GCC states is a source of discomfort for Washington’s Indo-Pacific allies. While the United States has been calling for a “rules-based order” in Indo-Pacific, its policy in the Middle East reflects an “interest-based order.” Hence, America’s renewed focus on the Middle East may compromise its Indo-Pacific objectives, with its allies in the region bearing the costs.