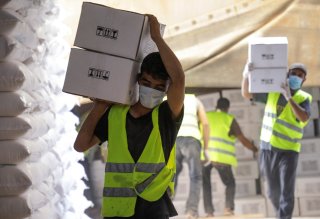 The United Nations Security Council (UNSC) has just hours to extend UNSC Resolution 2585 (UNSCR 2585), which allows for cross-border aid into northwest Syria, before its expiration today. Like similar cross-border reauthorizations, the debate has been marred by controversy because of Syria’s long-running war and geopolitical competition between world powers. However, today’s shifted context carries substantially deeper implications for Syrians. The country’s humanitarian metrics are at their lowest point since the war began, making Russia’s near-certain veto on any vote today—barring significant concessions to Moscow—highly concerning.

The humanitarian situation in Syria, which has remained one of the worst in the world for over a decade, sits at a major crossroads in the shadow of the upcoming UNSC vote. Indeed, most humanitarian metrics have substantially worsened in recent years as Syria’s economy has all but collapsed due to conflict, corruption, mismanagement, sanctions, and neighboring Lebanon’s historic currency crisis.

The economic crisis is worsening these dynamics, driven by a drastic devaluation in the Syrian Pound (SYP) in recent years that has spiraled the exchange rate to SYP 3,975 to 1 U.S. dollar as of this writing. The currency crisis is directly driving food insecurity. The monthly price for a standard food basket has reached a record high for eight consecutive months—an increase of over 300 percent between 2020 and 2021. This insecurity says nothing of food price increases since Russia’s invasion of Ukraine or the country’s limited economic activity, which is leaving most Syrians without opportunities for work or a sustainable income.

Within this context, the scope of the humanitarian operation authorized through UNSCR 2585 should not be understated. Nearly 10,000 trucks shipped humanitarian aid through Bab al-Hawa in 2021—an operation that simply cannot be replicated with other forms of aid delivery. This includes crossline aid, which travels across combat lines, an approach that has historically been subject to looting by pro-government forces and some rebel groups. This aid sustains roughly 4.1 million people living in northwest Syria.

Such statistics highlight the impact of cross-border aid, as well as the immediate risks of ending such an operation, as highlighted in an interview with Syria researcher and expert Suhail al-Ghazi. “The immediate impact will be food security, as millions of people in Idlib rely on bakeries supported by NGOs, IDPs relying heavily on food baskets, and the health sector that is already facing difficulties hindering the ability to provide health care for civilians,” Ghazi said. Thus, the upcoming vote on UNSCR 2585 takes place at a time of very high stakes.

Currently, the resolution authorizes a cross-border aid operation at the Bab al-Hawa crossing in northwest Syria along the border with Turkey. Three other border crossings have not been reauthorized in recent years, as Russia has used its veto power at the UNSC to slowly concentrate all aid through the official government in Damascus. This includes the Bab al-Salam crossing in northwest Syria, which closed in July 2020 after world leaders passed a watered-down UNSCR 2533. Similarly, the Al-Ramtha and Al-Yarubiyah crossings in the south and northeast, respectively, were closed in January 2020 following UNSCR 2504.

Talks to extend the current crossing collapsed on June 7 after disagreements between Russia and the West over a six-month or one-year extension. Moscow supports the former with additional stipulations, some of which are unclear, alongside long-running demands such as a report on crossline aid operations through Damascus.

Moscow often cites cross-border aid operations as a violation of Syria’s sovereignty, conveniently forgetting Damascus’s role in starving populations by preventing or stealing crossline aid, which is Russia’s preferred alternative to cross-border mechanisms. Each re-authorization vote has typically concluded in some form of concession for the Kremlin that bolsters its efforts to prop up the Assad regime. This vote will be no different.

Russian presidential envoy to Syria Alexander Lavrentiev has not minced words regarding Moscow’s position on the matter, saying, “The West has not implemented all the commitments it promised a year ago regarding the implementation of reconstruction projects, so we will likely look at canceling the cross-border aid system." He went on to specifically cite a lack of sanctions relief as a major factor behind this thinking.

Such threats should be taken very seriously. While the United States and most of the world support the cross-border mechanism, Russia can and already has vetoed the measure in the Security Council, meaning it can permanently shut down the operation. China has also voiced frustration with cross-border aid and has slowly aligned with Moscow on the subject in recent years, shifting from a position of abstention that typically defined its stance in the past. Both vetoed proposals from Norway and Ireland at the UNSC on July 8.

“Russia is going to veto the resolution in its current authorization and the West are not going to provide reconstruction because it will benefit not only the regime and its businessmen but could benefit Russian oligarchs who were sanctioned after the Russian invasion,” noted Ghazi.

The most prominent factor threatening cross-border aid today lies in Ukraine. While Moscow has certainly played a belligerent role in Syria, its invasion of Ukraine has negatively transformed diplomatic dynamics surrounding Syria’s war. As a result, Russia and the West will have a much more difficult time coming to an agreement, if they do at all.

Ghazi noted Moscow’s interest in connecting these issues, adding that the West will not buy in. “Russia is connecting both issues by refusing to renew the resolution and talking [about] how Geneva is no longer neutral for the Constitutional Committee. However, because the West doesn’t have enough cards in Syria to pressure Russia, I think they won’t connect [the issues] and will go with their alternative plans,” he said.

Moscow expects major concessions and will use Syria to make gains, such as a shortened six-month authorization that sets up aid efforts for failure, or possibly on the Ukraine file. It is unlikely that Western leaders will give any ground on Ukraine, whether it be ceding territory or offering Russia sanctions relief.

Failure to secure concessions regarding Ukraine would lead the Kremlin to demand sanctions relief for Damascus in exchange for the reauthorization of UNSCR 2533, although current dynamics prove Russian president Vladimir Putin wants more. It is difficult to see the West seriously offering further concessions in this regard, although there is talk of some additional UN-endorsed early recovery assistance in the works.

However, whether this seriously extends to reconstruction assistance without any tangible political reform—a primary objective for Moscow—remains to be seen, as it still requires sanctions relief in many instances. Interestingly, U.S. ambassador to the UN Linda Thomas-Greenfield recently “reaffirmed U.S. support for early recovery efforts, which we know continue to be an important component of sustainable response efforts.” Thomas-Greenfield’s comment was perhaps a signal to the Russians or a substantive sign of current talks. That said, with Assistant Secretary of State for Near Eastern Affairs Barbara Leaf reiterating the United States’ rejection of any effort legitimizing Assad in such a manner, the Biden administration is sending mixed signals on the subject.

Ultimately, given the humanitarian situation in Syria, providing some concessions on reconstruction in exchange for continued cross-border mechanisms makes sense, even if it is a tough pill for many to swallow. Still, most signs point to the cross-border operation shutting down today, as many in Washington—particularly Congress—reject such concessions. If the Iran nuclear talks are any indication of Congress’ indefatigable hawkishness and Biden’s disinterest in taking foreign policy risks that harm congressional alliances, cross-border aid is likely finished, barring bold decision-making at the UNSC.