The Best Bad Option: The Case for Leaving Syria 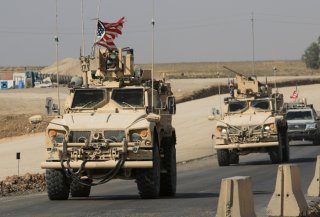 The time has come for the United States to withdraw from Syria. Participation in the conflict has long lost its strategic value for Washington, given Syrian president Bashar al-Assad’s pyrrhic military victory and the territorial defeat of the Islamic State (ISIS) in March 2019. The United States lost its leverage to support a diplomatic resolution to the conflict when Turkey’s October 2019 military intervention catalyzed a U.S. withdrawal from all but a narrow strip of land containing the country’s oilfields, which is known as the Autonomous Administration of North and East Syria (AANES). The United States’ decision to arm the Syrian Kurds, who comprised about 10 percent of Syria’s pre-war population, has alienated the country’s majority Sunni Arab populace and temporarily brought together longtime historical foes Russia, Iran, and Turkey. The approximately 900 remaining American soldiers are increasingly vulnerable, surrounded by hostile Iranian proxy fighters to the west, south, and east, and to the north by Turkish mercenaries who engage in near-daily artillery exchanges with Washington’s Kurdish allies, the People’s Protection Units (YPG). Leaving Syria will not only save American lives but will also place U.S. adversaries in a quandary by removing the common enemy of the Syrian conflict.

The tacit U.S. policy in Syria since the territorial defeat of ISIS in March 2019 has been to create a Kurdish state in northeastern Syria to act as a bulwark against any future Salafi jihadist organizations and to interdict weapons shipments from Iran to Lebanon and southeastern Syria for use against Israel. The failures of this approach are multiple. For one, ISIS has endured in Syria in the form of the al-Hawl refugee camp, which is protected by U.S. and YPG forces. Inside, some 62,000 people—mostly wives and children of former fighters—have organized to indoctrinate inmates and govern the camp in a manner in keeping with ISIS’ extremist views. Intermittent YPG raids into the camp have not managed to dislodge ISIS control of the prisoner population, and the United States has been unable to respond due to both domestic and foreign legal constraints on its behavior toward captured foreign fighters.

Furthermore, Washington’s hopes of a Syrian Kurdish state have been frustrated by the YPG’s inadequate attempts at governance. Famine, drought, and an energy shortage, though prevalent across Syria, have been acute in areas administered by the YPG. The legislative council that governs YPG-held areas failed to implement measures to address these problems in 2021, citing budgetary issues. Riots against YPG management are routine in the Arab-majority regions of the AANES. Syrian Arabs are already woefully underrepresented in local councils and the security services, and the YPG has imitated Assad’s oppressive tactics to silence dissidents. Finally, the American goal of blocking Iranian weapon shipments transiting Syria has failed. Indeed, the southern bank of the Euphrates River is bristling with Iranian munitions; Iranian proxies have used these weapons for strikes on U.S. forces and on Israel.

Pundits have been quick to describe the Syrian conflict as a struggle pitting the United States and the YPG against an alliance of Russia, Iran, Turkey, the Assad regime, and the lingering elements of the Syrian opposition. In reality, this partnership is so riddled with strategic cleavages that the most likely outcome of a U.S. withdrawal is a conflict between the war’s various parties. Russia and Iran, Assad’s staunchest allies, disagree wildly over who should be the most influential actor in post-conflict Syria. Turkey is the only party still calling for Assad’s removal, though Ankara would prefer its Islamist mercenaries take his place. Assad is in need of funds to stabilize Syria, and his search for partners in Europe and among the Gulf states will likely fray relations with Russia and Iran. Moreover, the war between Assad and the Syrian opposition continues in Idlib, the most visible indication that Russia, Iran, and Turkey have conflict in their future, not cooperation.

Advocates of maintaining U.S. forces in Syria point to the admittedly poor records of Russia, Iran, and Turkey in combating Salafi jihadist groups in Syria. The problem with that perspective, apart from the fact that ISIS is far more of an issue outside of Syria, is that all three countries have reason to prevent an ISIS resurgence. For one, the governments in Ankara, Moscow, and Tehran all aim to destabilize the Western-led international order, and failing to rehabilitate Syria would be a blow to their ability to offer a credible alternative to U.S. leadership. On a more concrete level, undermining the U.S. presence in Syria is a costly endeavor for each country. Without U.S. involvement, their governments will have more resources available to fight each other, as well as ISIS. It is also important to remember that these authoritarian states have no qualms about jailing political dissidents indefinitely. This renders them more suitable to resolving the problem with the ISIS-run camp at al-Hawl than the morally-bound United States.

The removal of U.S. forces from Syria will need to be coordinated, and it will leave a power vacuum in the eastern extremities of Syria. The United States and the YPG control Hasakah Province in the northeastern corner of Syria and the northern bank of Deir ez-Zour Province in the east. Iran would likely quickly occupy Deir ez-Zour, which leaves the fate of Hasakah open to determination. For Washington, Turkey is the difficult yet rational option for replacing U.S. troops in Syria. Ankara has multiple incentives to seize additional Syrian land. For one, Turkey has a historical claim to Hasakah dating back to the National Pact of 1920, which were the borders sought by the last Ottoman parliament before its dissolution. Occupying this area would thus represent a revanchist victory for President Recep Tayyip Erdoğan, who faces reelection in 2023. Moreover, anti-Kurdish operations generally lead to spikes in his popularity, which he needs given Turkey’s current economic crisis.

The general attitude toward Turkey in Washington—especially in the wake of Erdoğan’s recent decision to oppose Sweden and Finland’s bids for NATO membership—is overwhelmingly negative. Prominent think tanks and newspapers have called for Turkey’s removal from NATO and mistakenly believe Turkey to be a loyal Russian ally. The true nature of Ankara’s allegiances is more complicated and needs to be considered in the historical context. Since the late Ottoman period, Turkish rulers have been acutely aware of their weakness relative to the great powers. This has prompted sultans and presidents to adopt a reactive foreign policy, allying with whoever is willing to protect Turkish interests at the moment. Great Britain protected Turkey from the predations of Tsarist Russia in the mid-nineteenth century. When London failed to preserve Ottoman holdings in Africa and the Balkans, the empire pivoted to Germany shortly before the outbreak of World War I. The Republic of Turkey sent troops to fight alongside the U.S. in Korea in 1950 and joined NATO in 1952 as part of a reaction to Stalin’s statement claiming the Dardanelle Straits for the Soviet Union.

Russia remained the most significant external threat to Turkey until 2015, when the United States decided to train and equip the YPG. For all of Erdoğan’s bluster, he is correct to label the YPG a euphemism for the Kurdistan Workers’ Party (PKK), a designated foreign terrorist organization in both the United States and Turkey. PKK members dominate the YPG’s upper echelons, the organization is subject to guidance from the PKK's headquarters, and its foundational ideology is rooted in the teachings of PKK founder Abdullah Ocalan. The main interlocutor between U.S. and YPG forces is Mazloum Abdi, a PKK member since the 1990s and a longtime friend of Ocalan. The groups are so intertwined that they shuffle troops between Iraq and Syria depending on where Turkey focuses its counterterrorism operations.

Many would justifiably bristle at the thought of encouraging Turkish forces to backfill a U.S. withdrawal. The human rights abuses committed by both Turkey and its mercenaries against Syrian Kurds in 2018 and 2019 were gruesome and earned widespread condemnation. However, the hard truth is that a Kurdish state in Syria is not viable; apart from the Euphrates River to the south, it is landlocked and without natural borders. The Syrian Kurdish population, traditionally confined to three cantons across northern Syria, is too small to create an ethnostate. And by remaining part of the PKK, any YPG political entity will be unable to substantially trade with Turkey or the increasingly pro-Turkish Iraqi Kurdish government, both vital markets due to the former’s connection to Europe and the latter’s access to oil. The best future for the Syrian Kurds is, tragically, reconciliation with the Syrian government. Rejoining Damascus will summarily grant the Syrian Kurds the protection of both Russia and Iran, neither of whom are as hostile to the YPG as Turkey.

Returning northeastern Syria to Turkish control rewards both those in the U.S. who consider Turkey an adversary and those who deem partnership with Turkey, however difficult, to be necessary in light of greater threats, such as Russia. For the latter, consider Syria’s oil fields, which are badly managed by the YPG. Syria produced 380,000 barrels per day before the war, but they can only manage about 25,000 under Syrian Kurdish control. Turning over control of these resources would be a boon for Turkey and would damage Russia’s most important point of leverage over Ankara. While Turkey has exacerbated the humanitarian conditions in the AANES, including cutting off the YPG’s access to water from the Euphrates River, Ankara lavishes humanitarian aid on the parts of Syria it controls. Ankara’s over $7.6 billion in assistance and its successful resettlement of some of its Syrian refugee population testify to Ankara’s commitment to stability, albeit on its terms.