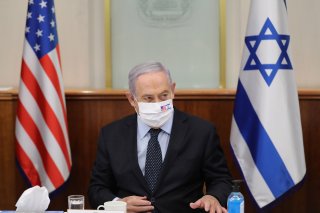 The American Israel Public Affairs Committee is clashing with several left-leaning pro-Israel groups over a proposed amendment that would prevent the Israeli government from using U.S. military aid to annex Palestinian territories.

Israel plans to unilaterally annex parts of the disputed West Bank under a peace plan released by U.S. President Donald Trump. Critics have warned that the move would jeopardize Israel’s peace treaties with its neighbors and destroy prospects for Israeli-Palestinian peace.

Sen. Chris Van Hollen (D–Md.) is now proposing an amendment to the U.S. military budget that would ban Israel from deploying U.S. “defense articles, services, or training” to any territories it annexes without permission from the Palestinians.

“There is a difference between a negotiated settlement and one imposed by illegal, unilateral annexation,” Van Hollen said in a July 2 speech on the Senate floor.

He argued that U.S. policy for decades has been to support an independent Palestinian state alongside Israel, claiming that U.S. agreements to aid Israel “never contemplated Israel annexing part of the West Bank” with that aid.

Van Hollen also warned that annexation would “unleash a cascade of harmful consequences” for Israel, and “strengthen the hand of our common enemies Iran, Hamas, and Hezbollah.”

“U.S. security assistance to Israel should be used to help Israel meet its legitimate defense needs—not to implement actions that will undermine its own security and democracy, trample on Palestinian rights and harm U.S. interests,” the groups wrote.

The signatories added that annexation “would violate international law and severely imperil Israel’s future as a secure, democratic homeland for the Jewish people” by condemning Palestinians to live permanently under Israeli control.

AIPAC, however, pushed back, arguing on Monday that former presidents George W. Bush and Barack Obama had never imposed “political restrictions” on aid to Israel “because doing so would undermine U.S. national security interests.”

“The Van Hollen amendment restricts where Israel can place lifesaving missile defense systems like Iron Dome,” the group argued in a Friday statement posted to social media. “It's dangerous to threaten Israel's ability to fully utilize these defenses.”

AIPAC added that jeopardizing Israel's security would “cause ordinary Israelis to question the wisdom of taking further risks for peace.”

Van Hollen had similarly stated during his July 2 speech that U.S. aid was meant “to give Israel the confidence to pursue peace on the basis of a two-state solution.”

But, he said, allowing annexation to move forward would “make a mockery of the tenets of bipartisan U.S. foreign policy.”