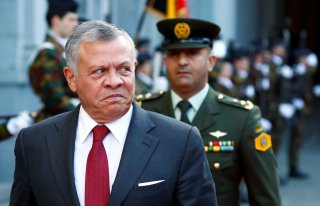 King Abdullah II of Jordan talked on the phone with Secretary of State Mike Pompeo to affirm Jordan’s “steadfast position” against Israeli annexation of the Palestinian territories, the Jordanian foreign ministry said on Thursday.

But the U.S. State Department’s own summary of the call did not mention the Israeli-Palestinian conflict. It only mentioned how America and Jordan were cooperating on combating the coronavirus pandemic as well as monitoring “developments in Syria.”

The king’s call was the latest in a series of talks with U.S. officials meant to push back against Israel’s impending annexation of some of the Palestinian territories.

U.S. policy towards the Israeli-Palestinian conflict has historically been to support a “two-state” solution, with an independent Palestinian state in the West Bank and Gaza alongside Israel.

The Israeli government is now allowed to annex large swaths of the Palestinian territories under a peace plan proposed by President Donald Trump earlier this year, which critics say could kill any prospects for Palestinian independence.

Israel has missed its self-imposed July 1 deadline to take over the territories, but the possibility of annexation still looms.

Jordan, which had controlled the West Bank until losing to Israel in a 1967 war, has a special interest in preventing annexation.

“If Israel really annexed the West Bank . . . it would lead to a massive conflict with the Hashemite Kingdom of Jordan,” King Abdullah II said in a May interview with Der Spiegel, warning that the end of Palestinian autonomy would mean “more chaos and extremism in the region.”

Palestinian authorities have already cut off cooperation with Israel over the decision to annex.

Jordan's king had reached out to U.S. lawmakers via videoconference last month to discuss “the importance of establishing an independent, sovereign, and viable Palestinian state” along the pre-1967 borders.

Republicans have generally supported annexation or remained quiet, but more than a dozen Democratic senators are pushing for a military budget amendment that would ban Israel from using U.S. military aid to annex new territory.

“The right to a secure homeland for a Jewish people does not mean the right to . . . deny Palestinians a homeland of their own,” Sen. Chris Van Hollen (D–Md.) said on the Senate floor last week. “I do not believe that the United States government, United States taxpayers should be aiding and abetting Prime Minister [Benjamin] Netanyahu's plan to annex the West Bank.”

Israel is waiting for a green-light from a joint U.S.-Israeli committee set up to draw new borders for the state. But the deadline passed without any major announcement.

The Jerusalem Post reported that a variety of political factors, including the coronavirus pandemic, had delayed any decision from the committee.

The delay bought time for various actors to push back against the Trump peace plan. Egypt, France, and Germany issued statements on Tuesday warning against annexation.

Jordan, for its part, has continued a strategy of lobbying the United States to drop its support for annexation.

The king is making “continuous and uninterrupted” efforts to stop annexation and create “real prospects for a just and comprehensive peace,” Jordanian foreign minister Ayman Safadi announced on Tuesday.

“Our priority now is stopping the implementation of annexation because annexation will be a big reversal of not only Jordanian-Israeli relations but also every effort to realize a comprehensive and just peace in the region,” he said. “We are exploring the next steps with our dear friends.”