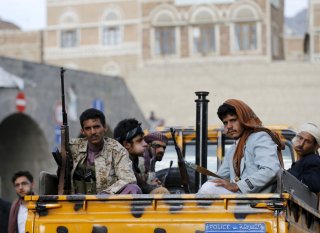 Prince Turki Al-Faisal Al-Saud, the former director of Saudi Arabia’s intelligence agency and Saudi ambassador to the United States, sharply criticized President Joe Biden on Sunday, accusing him of ignoring Saudi Arabia’s key security concerns and failing to respond to terrorist attacks against Riyadh during his time in office.

Speaking to the Saudi-run Arab News newspaper on Sunday, Prince Turki claimed that Biden had undermined Saudi national security by failing to respond decisively to a series of Houthi missile attacks against the kingdom in 2021 and by removing the group from its list of foreign terrorist organizations three weeks after his inauguration. Prince Turki argued that the Houthis served as an arm of Iran’s foreign policy in the Middle East and that delisting them had “emboldened them and made them even more aggressive in their attacks on Saudi Arabia [and] the UAE.”

Before and during his time in office, Biden has had a notoriously acrimonious relationship with Saudi Arabia’s leaders. On the campaign trail, then-candidate Biden described Mohammed bin Salman (MBS), Saudi Arabia’s crown prince and de facto leader, as a “thug,” adding that he would treat Saudi Arabia as a “pariah” state. Once he entered office, Biden publicly declared that he would not speak with MBS, as his diplomatic equivalent was King Salman and MBS was instead equivalent in rank to Vice President Kamala Harris. He also ended U.S. direct support for Saudi Arabia’s war against the Houthis in Yemen, although U.S. defensive support for Saudi Arabia against Houthi missile attacks has continued.

Following the Russian invasion of Ukraine on February 24, however, Biden attempted to call MBS and urge Saudi Arabia to increase its oil production—a call that MBS declined. The crown prince later claimed in an interview with The Atlantic that he “did not care” how Biden perceived him.

The strategic relationship between the United States and Saudi Arabia dates to 1945, when President Franklin D. Roosevelt met King Abdulaziz bin Abdulrahman al-Saud, commonly known in the West as Ibn Saud, on the USS Quincy in the Suez Canal. The two leaders’ meeting formed the basis for the relationship between Washington and Riyadh over the next eighty years: the free export of oil in exchange for U.S. military equipment and security guarantees.

Although Biden has publicly condemned Saudi Arabia, his administration has also sought to rebuild ties with the desert kingdom. In March 2022, the U.S. deployed Patriot missile interception batteries to Saudi Arabia in the aftermath of a Houthi missile attack against southern Saudi Arabia. Biden has also nominated Michael Ratney, a career diplomat and former U.S. special envoy for Syria, to the position of U.S. Ambassador to Saudi Arabia, which has gone unfilled since his inauguration.

Prince Turki emphasized that Saudi Arabia had been “grateful” for the recent assistance, but added that “we need to see more.”