Gambling with 80 Million Lives: Why Erdogan Lied about Coronavirus 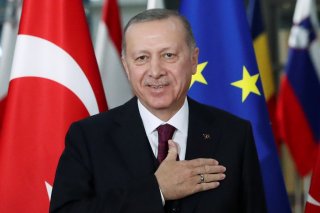 As coronavirus spreads along Turkey’s borders, President Recep Tayyip Erdoğan and his ministers remained in denial. Just last week, Turkey’s health minister denied any cases existed in the country, a claim made against evidence that travelers to Turkey had been infected there. Ergin Kocyildirim, a pediatric cardiothoracic surgeon at the University of Pittsburg’s School of Medicine, wrote a brilliant essay describing both the Turkish government’s claim to have established an effective testing kit and the fraudulence of its claims.

When faced with both local and international disbelief about why coronavirus would bypass Turkey, Turkish authorities took a dual approach. As in China, they arrested whistleblowers. They went beyond simple repression as panelists on the state-controlled Turkish press insisted that Turkish genes rendered most Turkic peoples immune. Many Turks, Erdoğan included, may embrace the notion of both Islamic and Turkish supremacy, but his basic ignorance of science may have condemned Turks to once again prove Darwin correct.

What might have motivated Erdoğan to lie about coronavirus and gamble with the lives of 80 million Turks?

Part of the reason might be Erdoğan’s dangerous combination of arrogance and ignorance. The Turkish leader’s arrogance is reflected in the thin skin he has toward criticism. According to the Turkish Justice Ministry, Turkish police charged an average of 4,500 people each year from 2014 through 2017 with insulting the Turkish leader for criticizing Erdoğan or speaking about his corruption. (Full disclosure: I am one of them). In 2018, the Erdoğan regime initiated 26,000 new cases. Aa cracks began to show in the Turkish economy, Erdoğan spared no effort to muzzle growing criticism. Nor is the Turkish leader’s ignorance any secret as the crackdown on the free press has meant the surviving media merely amplifies the conspiracy theories in which Erdoğan and his top aides believe, such as the Jews targeting them with telekinesis, or that bands on migratory birds to be evidence of Israeli espionage. The Turkish accusation that followers of exiled theologian Fethullah Gülen contributed to the spread of the virus likely is only a matter of time.

A larger motivation may be fear. While Turkey’s demography is shifting in Erdoğan’s favor as conservative families from Turkey’s Anatolian heartland grow relative to the Europeanized Turks from central Istanbul and the Mediterranean coast, the economy is faltering. In 2010, Erdoğan promised that by Turkey’s 2023 centennial, Turkey would be one of the world’s top ten economies. Even before coronavirus, Turkey would be lucky to remain in the top 20 as corruption, nepotism, political interference in business, and broad mismanagement have combined to send confidence in Turkey’s economy into the gutter.

As Turkey’s economy teeters, the means to avoid catastrophe are narrowing. Looting Cypriot gas was one strategy, but even if Turkish exploration ships struck it rich, it would still be years to bring the gas to market. What Erdoğan really fears is the collapse of Turkey’s tourism industry. In 2018, the Turkish tourism industry accounts for nearly $30 billion dollars. Just a year ago, Erdoğan promised that Turkey would host 50 million tourists, raising that figure by at least 20 percent. Add into the mix Turkey’s investment of approximately $12 billion in a new Istanbul airport, expected to be the world’s largest, and one in which Erdoğan and his family are reportedly heavily invested. It seems Erdoğan sought to downplay reports of coronavirus in order to encourage tourist dollars to continue to flow. In doing so, he sought not only to play Russians, Europeans, and Americans for fools, but also endangered their lives. Unfortunately for Turkey, it will be Turks who will most pay the price as Turkey threatens to become the virus’ next big cluster. One Turkish doctor estimates that as many as 60 percent of Turks may now be infected and that Erdoğan is retarding testing in order to prevent the scale of the catastrophe from becoming known. Deaths were inevitable, but Erdoğan’s dishonest will likely cause many thousand additional deaths in his country added to the dozens Turkey reportedly has already experienced but will not officially report.