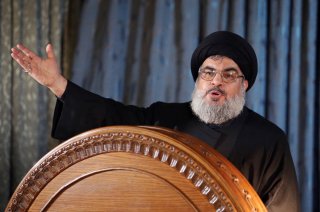 Hassan Nasrallah, a Shi’a cleric who has led the Hezbollah militant group and political party since 1992, accused Saudi Arabia of providing both ideological and material support to ISIS during the early stages of its war against the Syrian and Iraqi governments.

The Hezbollah leader addressed King Salman of Saudi Arabia directly during his televised speech, claiming, “The [real] terrorist is who exported the Daesh [ISIS] ideology to the world. The terrorist is the one who sent thousands of Saudis to conduct suicide operations in Iraq and Syria, and it’s you.”

Nasrallah also criticized King Salman for Saudi Arabia’s ongoing military intervention in Yemen, which has failed to dislodge the Houthi rebels from the country’s north but intensified Yemen’s dire humanitarian crisis. All sides in the Yemen conflict have been implicated in human rights abuses by UN investigators.

Saudi leaders have decried what they view as Hezbollah’s pernicious influence on Lebanon’s political process and supported opposing factions within the country. A speech by King Salman last week directly attacked Nasrallah and “the hegemony of terrorist Hezbollah over the Lebanese state.”

The group has also been implicated in drug smuggling through the port of Beirut, a critical outlet for narcotics produced in war-torn Syria and trafficked to Lebanon before shipment to the rich nations of the Gulf. Repeated seizures of millions of pills of Captagon, an amphetamine popular in the Middle East, have led to increased tensions between Lebanon and the nations of the Gulf Cooperation Council (GCC).

In part because of its concern over drug shipments, and in part because of a former Lebanese minister’s comments criticizing Riyadh’s intervention in Yemen, Saudi Arabia has embargoed all Lebanese imports since October.

“We didn’t attack Saudi Arabia,” Nasrallah argued, defending the group’s conduct in Lebanon and Syria. “They were involved in the greater conspiracy that was destroying the region.”

Nasrallah’s critics within Lebanon have accused him of intentionally poisoning ties between Beirut and Riyadh in order to serve the objectives of Iran, Hezbollah’s foreign patron. Iran and Saudi Arabia have each accused one another of malign behavior throughout the Middle East, and have competed heavily for influence in Lebanon, Syria, and Iraq.

Hezbollah is widely considered to be the most powerful armed group within Lebanon, exceeding the strength of the Lebanese Army. Nasrallah had earlier claimed that the group had 100,000 or more “trained fighters,” and it is known to possess tens, if not hundreds, of thousands of missiles for use against Israel in a future military conflict.