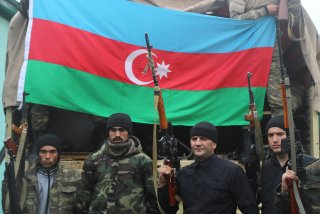 Following a telephone conversation between Iranian Foreign Minister Hossein Amirabdollahian and Azerbaijani Foreign Minister Jeyhun Bayramov, the two leaders agreed to resolve a festering diplomatic crisis between their nations, which had escalated since Tehran accused Azerbaijan of allowing the Israeli military into the country.

The Azerbaijani foreign ministry announced the move in a statement, saying that “the harmful rhetoric observed recently . . . does not correspond to the level of friendly relations between our countries, and the need to resolve all differences through dialogue.”

The statement stressed the value of “territorial integrity and sovereignty” and pledged to resolve future incidents through diplomacy.

The Iranian Foreign Ministry confirmed the drawdown in tensions in a statement.

Iran and Azerbaijan have been embroiled in the dispute over the alleged presence of Israel in Azerbaijan since September. In early October, Tehran followed up its rhetoric by conducting military exercises along its border with Azerbaijan—prompting similar exercises on the opposite side of the border from Azerbaijan, joined by its ally Turkey.

Azerbaijan, one of four Shi’a-majority countries, has long maintained an uneasy relationship with Iran, and the two nations have engaged in territorial disputes in the past. Unusually, Azerbaijan has instead held a close security relationship with Israel, and Israeli technology, particularly its drones, were instrumental in Azerbaijan’s victory over neighboring Armenia in the Second Nagorno-Karabakh War from September until November 2020. Iran, which had supported Armenia in the war’s first iteration from 1988 until 1994, remained strictly neutral in the second, possibly contributing to Armenia’s defeat.

Tensions between Tehran and Baku were also fueled by Azerbaijan’s unilateral decision to impose a “road tax” on Iranian drivers passing through the territory it regained in the 2020 war to reach Armenia. After the taxes were introduced—and two Iranian drivers were arrested for refusing to pay them—Iranian trucks stopped using the roads altogether, curtaining Iran’s trade with Armenia.

The statement from the Azerbaijani Foreign Ministry committed the two sides to negotiations on transit issues, concluding that it would be “necessary to establish direct dialogue” in the future.

In earlier consultations with Armenian Foreign Minister Araray Mirzoyan in Tehran, Amirabdollahian announced the construction of a road from Iran to Armenia that would avoid any of Azerbaijan’s territorial gains, avoiding the problem of tolls. The road is scheduled to be opened by the end of 2021.