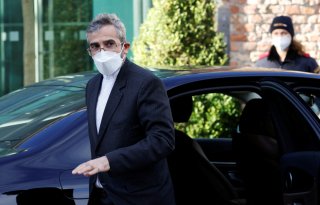 As nuclear negotiations between Iran and the “P5+1” nations draw to a close in Vienna, Iranian diplomats have reportedly put forth their final proposals for an agreement, claiming that a breakthrough in talks can only be achieved through the West’s acceptance.

“It’s better for Iran if there’s an agreement in Vienna and sanctions are lifted today rather than tomorrow,” Iranian foreign minister Hossein Amirabdollahian said on Monday during a news conference with Irish foreign minister Simon Coveney. “So we are in a hurry for a good agreement, but it must be within the framework of logical talks and to achieve the rights of the Iranian nation.”

Ali Shamkhani, the Secretary of the Supreme National Security Council, also indicated on Monday morning that Iran’s positions had been finalized and the outcome of the negotiations would rest on the West’s willingness to accept Tehran’s terms.

The current round of discussions in Vienna is the eighth since the talks began in late 2021. Although diplomats on all sides of the discussions have reported progress, significant gaps remain between the Iranian and American positions. Both sides have called for goodwill steps from the other before they will make concessions of their own. While the United States agreed to issue sanctions waivers on Iran’s civilian nuclear program last week— allowing European and Asian nuclear firms access to Iran’s nuclear power plants—neither Washington nor Tehran framed this as a concession.

Negotiations have been hampered by the indirect participation of the United States, which withdrew from the original nuclear agreement in 2018 under the leadership of former President Donald Trump. Although President Joe Biden has signaled his willingness to rejoin the agreement, Iranian negotiators have refused to meet directly with their American counterparts.

While the Trump-era “maximum pressure” sanctions caused significant damage to Iran’s economy, they also ultimately prompted it to restart its nuclear enrichment program. With the aid of advanced centrifuges, the program has successfully enriched uranium-235 up to purity levels of 60 percent, positioning it dangerously close to achieving weapons-grade uranium.

Iran has never publicly admitted to seeking nuclear weapons and has always insisted that its program is peaceful, although leaked documents from within Iran have revealed that the government has created designs for potential nuclear bombs.

Coveney, Ireland’s top diplomat, also met with Iranian president Ebrahim Raisi on Monday. During the meeting, he reportedly urged the Iranian leader to accept the terms of the JCPOA and return to the agreement, although he stressed that “Ireland believes … necessary guarantees need to be given to Iran as part of the current talks so that the deal can be restored.”