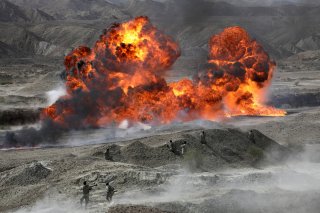 British Foreign Secretary Liz Truss and Israeli Foreign Minister Yair Lapid announced that the two countries would form a close partnership in attempting to ensure that Iran would not achieve a nuclear weapon.

The two leaders announced in a joint article for the Daily Telegraph that they would work “night and day” to prevent such an outcome. Toward this end, they committed to signing a ten-year “Memorandum of Understanding” outlining their deepening ties. Truss and Lapid suggested that that agreement would allow the two countries to work together on areas including defense, technology development, scientific research, and cybersecurity.

“We believe that a democracy rooted in freedom—which empowers citizens with the opportunity to innovate, create and fulfill their dreams—is the finest form of government,” Truss and Lapid wrote, contrasting Britain and Israel’s shared commitment to democracy and human rights with the perceived shortcomings of Iran in both areas.

With regard to Tehran, the two ministers firmly agreed that Tehran could never be allowed to acquire nuclear weapons. The subject of Iran’s nuclear program will be taken up by the P5+1 in Vienna this week, featuring the participation of the United States for the first time since its withdrawal from the Joint Comprehensive Plan of Action, also known as the JCPOA nuclear agreement, under the Trump administration in 2018.

The United Kingdom is participating in the Vienna negotiations. Israel is not participating in the negotiations and has indicated previously that the decisions the P5+1 reach there will have no impact on their own independent efforts to deter Iran’s nuclear program—including sabotage, cyberattacks, and, controversially, targeted assassination against Iranian nuclear scientists.

The original JCPOA, in which the Obama administration led negotiations with the government of Iranian president Hassan Rouhani, eventually resulted in the JCPOA, a deal committing Iran to abandon its nuclear program for several decades in exchange for wide-reaching sanctions relief. President Joe Biden, Obama’s former vice president, made a return to the JCPOA a campaign promise during the 2020 presidential election, and newly elected Iranian president Ebrahim Raisi has also indicated his willingness to return Iran to the agreement if sanctions are once again lifted. The precise details of such an agreement have been an issue of contention between Washington and Tehran; they are expected to be negotiated in Vienna along with the input of the other P5+1 nations.