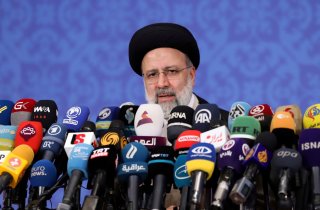 Controversial cleric and Judiciary chief Ebrahim Raisi was sworn in as Iran’s eighth president on Thursday. The inauguration ceremony was well-attended, with guests and representatives from more than seventy countries, as well as the European Union, the Vatican, and the Palestinian Hamas group.

In his inauguration speech, the sixty-year-old Raisi broadly outlined his objectives in office, including continuing to build up Iran’s autarkic “resistance economy” and maintain the country’s independence from foreign pressure. During the ceremony, a special tribute was conducted for Qassem Soleimani, an Iranian general who oversaw the country’s foreign military presence before his assassination in January 2020.

However, in spite of his commitment to defending Iran’s sovereignty, Raisi also indicated that he would pursue active diplomacy and “constructive and extensive engagement” with the rest of the world, underlining the importance of rebuilding Iran’s strained relations in the region. The new president also committed to continuing Iran’s negotiations with the United States in Vienna, where a renewal of the JCPOA Iran nuclear deal, exited in 2018 by President Donald Trump, was being put together. Raisi emphasized, as previous Iranian leaders have, that Iran’s nuclear program was intended for peaceful uses only and nuclear weapons were not a priority for Iran’s defense strategy.

Raisi assumes office at a time of great difficulty for Iran. Droughts and electricity shortages in the country have led to large-scale protests, particularly in the nation’s Khuzestan province, where ethnic Arabs have complained about discrimination. Liberal protesters have also attacked Raisi’s actions as a judge in 1988, where he sentenced thousands of political prisoners to death. Before the election, Amnesty International called for a criminal investigation into Raisi’s role in the executions.

Raisi was elected in June with 72.2 percent of the vote. However, the election was criticized as unfree by international organizations, who criticized the role of the Guardian Council—a powerful body of clerics responsible for preserving the character of the Islamic Republic—which had disqualified all of Raisi’s meaningful challengers beforehand. The electoral turnout was 48.8 percent, the lowest in Iran’s modern era.

Raisi succeeds President Hassan Rouhani, a relative moderate who served from 2013 to 2021 and oversaw the negotiation and implementation of the original JCPOA. It is widely speculated that he is a favorite to succeed the 82-year-old Supreme Leader of Iran, Ayatollah Seyyed Ali Khamenei, whose health has been the subject of rumors in recent months.