Israel's THOR Drone Is Ready for Just About Anything 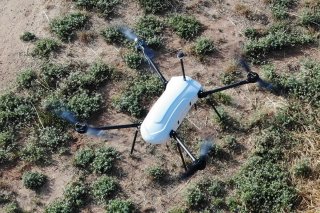 Israel’s THOR drone, a vertical take-off and landing mini UAV, was subjected to harsh environmental tests to qualify it for the most rigorous military use.

The drone, from Elbit Systems, is operational and being sold abroad and is used for surveillance and reconnaissance missions. Many small UAVs have been acquired by militaries over the years, but they have had to use commercial drones because most defense companies had not built small drone solutions that also were up to military standards. Elbit now says its THOR meets the MIL-STD-810 standard, which is a series of tests related to environmental engineering considerations.

THOR is already operational in Israel and sold worldwide, and the tests make sure THOR is ready for the harshest challenges. In a lab, the drone was subjected to freezing temperatures down to minus 40 degrees C and up to 65 degrees C. It was also subjected to gusting wind and rain. Previously many of these kinds of smaller drones, similar to the quadcopters one can buy in a store, would face issues such as overheating or being blown off course. Elbit has long experience in making drones, especially its larger Hermes drones, but perfecting smaller drone solutions is important today to meet the tactical needs of platoon and company level.

Elbit says that it has been improving these small drones over the last decades by increasing their range and flight time. THOR now can fly for seventy minutes with a 3kg payload. These changes have also made the drone deployable faster than the previous three minutes it took to get the drone ready to go.

“We improved reliability and made it easy to operate by any soldier or person in security or defense,” said an Elbit spokesperson. Eight months of environmental tests have paid off to give the THOR the ability to face dust, humidity and other issues, the company says. Day and night cameras and advanced optics, which Elbit specialized in, give the drone an edge but also make it more expensive. “This is a reliable and mature drone,” Elbit says.

While smaller quadcopters or VTOL drones were seen as kind of toys years ago or something that could be used for photography at weddings, increasingly militaries and terror groups have begun to understand how these UAVs can revolutionize warfare. But the demand by militaries far outpaced what defense companies were doing. Because smaller drones were not seen as a huge market and because military specifications and procurement take time, there were few drones like this available that also had the optics, secure communications and environmental tests needed. Elbit thinks THOR will fill this gap. It’s important to point out here that prices in this category are still unexpectedly high. For instance, a commercial quadcopter might cost a thousand dollars, whereas a military version can be more than $100,000. The reason for this is not the drone body or the controls, but rather the optics and communications, which need to be military grade and be able to operate in hostile environments. They need things like automatic pilots and being able to return to base if they are jammed. Even the battery in THOR was subjected to rigorous tests and modifications over a year to improve its performance.

Elbit Systems says that smaller drones are giving soldiers on the front line, such as infantry, a way to operate in a whole new way by having access to the air, which they previously didn’t have. This means they have more power over a realm of the battlefield they couldn’t have eyes on prior to the tactical drone age. It will also mean more UAVs being incorporated into armored vehicles.

The good thing for Israel is that its drone industry has been pioneering various systems for decades. However, these smaller drones, including VTOL drones, are seen as a major gamechanger in future operations. Prior to making smaller drones military-grade, Israel’s ground forces were relying on slightly larger drones, such as Israel’s Skylarks, which are catapult-launched and usually take several people to carry them and the equipment needed to fly and control them. Miniaturizing these platforms is like putting mortars and grenades in the hands of soldiers, as opposed to having them lug around artillery.

In general, Israel is seeking to improve its ground forces and special forces through more multi-dimensional units and combining special units from various parts of the defense forces. This is part of what Israel calls its Momentum multi-year plan. It has rolled out a new special forces unit in the air force and also made operational a multi-dimensional unit that uses several drones in its training and even unmanned vehicles. All of this is supposed to be linked together by more networked and digitized systems that provide commanders better imaging, algorithms to help them train and identify targets and decide which precision weapons to use, and even artificial intelligence to help them knit it all together with the air force and UAVs. Now, the modern warrior will have a huge amount of information at their finger-tips and need a way to process it. This means aids to help overlay what drones are seeing on the modern battlefield with what the soldier sees. Drones like THOR are a step towards this goal.

Image Information: Israel's THOR drone was designed by Elbit Systems and has met military standards for environmental conditions from freezing cold to the worst heat of the desert (Courtesy Elbit Systems).