The Layers and Limits of Diplomacy With Iran 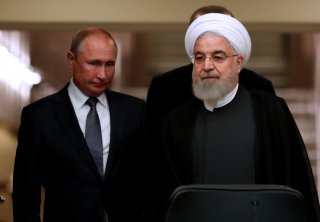 There is nothing like a presidential election campaign to spark debate about the direction of U.S. foreign policy toward the Middle East, and this election season is certainly no exception.

John Bolton in his newly released book is dismissive of diplomatic initiatives as a way to deal with Iran, including but not limited to the Joint Comprehensive Plan of Action (JCPOA), negotiated by the Obama administration, and abrogated by President Donald Trump. Taking a completely different tack, Daniel Benaim, a senior fellow at American Progress, and Jake Sullivan, a nonresident fellow at the Carnegie Endowment for International Peace, both close to the Biden campaign, expressed in an op-ed published by Foreign Policy in May their support for the United States getting back on track with a nuclear deal. In that op-ed, they also outline a role for the United States in creating a regional dialogue, with a particular focus on tamping down hostilities between Iran and Saudi Arabia.

We agree that the right path for the United States is to pursue nuclear and regional diplomacy. These diplomatic efforts should try to defuse tensions and provide forums for dialogue among the major regional players, like Saudi Arabia, Iran, Turkey, and Egypt. Israel too should be encouraged back on the path toward negotiation with the Palestinians, and if that is successful, with the wider Arab and Muslim world.

But it is important that any policy prescriptions be based on a clear-eyed analysis of Middle East regional dynamics and of the likely constraints that will be imposed on the next presidential administration, whether that be under Joe Biden or Donald Trump. The Middle East has become a conflict trap, and while constructive diplomacy by the United States can be a stabilizing force, awareness of the limitations of what various tracks of negotiations with Iran can deliver is equally important.

First, the global and regional contributors to conflict in the Middle East need to be disentangled from one another. Sullivan and Benaim argue that ending the Iran-Saudi conflict is a golden key to regional stability. For sure, resolving this conflict will have positive knock-on effects, such as defusing the proxy battle in Yemen and possibly reducing Sunni-Shi’i tensions and extremism. But it is important to be clear that the main conflict in the Middle East is not between Saudi Arabia and Iran; instead, it is between the United States and Iran. Secondarily, it is between America’s nuclear-armed ally Israel and Iran. After all, the relationship between Iran and Saudi Arabia, while important for de-escalating some tensions in the region, is not the decisive conflict involving Iran in the region.

Even though Saudi threat perceptions focus primarily on Iran, Iran sees its primary threat as emanating from the United States and Israel. The Iranian Revolutionary Guard and Iranian-supported Shi’i militia deployments in Iraq, Syria, and Lebanon and their engagements in Afghanistan are aimed at countering and deterring perceived American and/or Israeli threats, not Saudi ones. Even their engagement in Yemen and attacks on gulf shipping and Saudi oil fields last year are in large part aimed at gaining leverage over the United States through pressuring one of its regional partners, rather than countering some threat from Saudi Arabia itself.

In fact, the last existential threat to Iran that emanated from the Arab world was Saddam Hussein’s Iraq, and that threat was neutralized by the U.S. toppling of that regime in 2003. Saudi Arabia approaches an existential threat in the eyes of the Iranians only indirectly and to the extent that it encourages or backs a third party, like Saddam’s Iraq in the 1980s, or more recently the United States, to confront Iran; it does not pose an existential threat in and of itself.

Second, the Middle East is undergoing a profound transformation from within, which can be influenced but not controlled by outside powers. The United States, which has held considerable sway over regional dynamics in the past, can shape the decisional calculus of key actors, but cannot shape the region in its own image. The Arab Spring, four civil wars, and rivalries among regional powers are signs of a region struggling for a political order according to its own internal logic and dynamics. The United States can facilitate cooperation among regional actors, or it can encourage division and conflict like the Trump administration has. But ultimately, conflict resolution in the region will require leaders to recognize that negotiation, de-escalation, and eventual cooperation is the only sustainable pathway forward. While the United States can’t impose political will on the leaders of the region to cooperate, it can at least not escalate the conflict or encourage regional players in that direction.

Third, any diplomatic initiative needs to consider the credibility and reliability deficits the United States has in the region today. These predate the current president and will not disappear easily, even if Biden is elected. Abrupt and fundamental reversals in policy from Washington have led both friends and foes to hedge against the United States, potentially improving the prospects for Russia and China in the Middle East. Clarity as to U.S. intentions in the region and consistency of actions will be critical in closing this deficit, but it will likely be a slow and laborious process. Thus, U.S. diplomacy must lead on three axes.

As suggested above, talks between the United States and Iran are of paramount importance. It is critical that Washington balance its pressure posture toward Iran with active diplomacy that provides a credible pathway to change Iranian behavior. The next administration can and should re-engage with the JCPOA as the best avenue to handle the nuclear challenge while addressing its limitations related to duration and sunset clauses. Important, too, is robust diplomacy—which means strong pressure, combined with diplomatic engagement—on the matters of Iran’s missile program and its direct and proxy deployments throughout the region.

While this approach might achieve noteworthy results on the nuclear file and possible progress on missile issues, it is unlikely to affect Iran’s commitment to its regional deployments in Lebanon, Syria, Iraq and Yemen. While Iran is eager to get out of crippling sanctions, it is likely to offer only limited concessions to get there given the conviction among Tehran’s leadership that the United States remains an existential threat and that soft approaches from the Obama administration—or a potential Biden administration notwithstanding—will repeatedly prompt the United States to revert to its oft-expressed predilection for regime change. From the perspective of the leaders of the Islamic Republic, while Tehran can make tactical concessions, it must keep its guard up on a strategic level.

In other words, there appears to be no realistic pathway in which the leadership of the Islamic Republic will give up its strategic doctrine of having “forward defense” positions in Lebanon, Syria, Iraq, or Yemen, meaning Iran is likely to remain committed to its regional influence strategy in some of the most fragile countries in the region. It will take far longer than the four or eight years of a U.S. presidential administration—or perhaps a fundamental political change in Iran—for the United States and Iran to engage in a context that could lead to a fundamental shift in Iranian threat perceptions and strategic priorities in the Middle East. This is likely to mean that while some U.S. sanctions are removed as part of a return to the JCPOA and/or some progress on missile issues, Iran will likely remain under other sanctions and be perceived as something of a pariah state for the United States and many regional players as long as it maintains its expeditionary proxy forces in the region.’’

Despite these difficult conditions, the United States should encourage a regional dialogue involving Saudi Arabia and Iran, and ideally other regional actors as well. But it should be clear that as long as Iran’s threat perceptions vis a vis the United States and Israel remain in a heightened state, Iran will not negotiate away its presence in various regional countries. In that context, regional dialogue can be useful in defusing tension and managing regional tensions and proxy conflicts but does not have a realistic pathway to resolving the fundamental issues of disagreement with Iran over its regional policies.

That having been said, regional dialogue between Iran and its Arab neighbors is important for several reasons: to tamp down sectarian divisions and radicalization, to de-escalate proxy conflicts, such as in Yemen, and to find areas of limited cooperation (e.g. over the Hajj, maritime security, health and other specific sectors) that could serve as confidence-building measures for broader gradual progress over time.

But regional diplomacy should not be limited to issues related to Iran. The Middle East is the least ordered, and most conflict-ridden, region in the world. Alongside conflict with Iran is the longstanding Israeli-Palestinian conflict, which has gotten short-shrift in many of the election-year analyses of the Middle East that have come out recently. Also, defusing the conflict between Turkey and Qatar on one side and Saudi Arabia, the UAE, Egypt, and Bahrain on the other will be instrumental in resolving regional tensions, including the civil war in Libya.