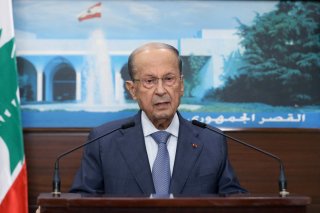 President Michel Aoun of Lebanon has vetoed a proposed electoral law that would move the country’s parliamentary elections forward two months, from May to March, arguing that such a change would cause logistical issues, prevent young people reaching legal age from March to May from voting, and lead to a shorter period of voter registration.

While the president’s faction appears to have accepted the reasons for the veto, a majority of parliament still supports moving the elections forward, according to reporting by Al Jazeera.

“So far,” Alain Aoun, a senior member of the country’s parliament (and the president’s nephew) told the news organization, “a majority is still for March 27,” the proposed new date.

The country’s fractious parliament approved the two-month shift forward so that campaigning for the elections would occur before the month of Ramadan when Lebanon’s majority-Muslim population is forbidden from eating or drinking during the daytime.

Lebanon’s 128-member parliament, to which members are chosen by an elaborate system of proportional representation for each of the country’s many ethno-religious groups, is widely regarded as dysfunctional and ineffective. Although a member of parliament’s term nominally lasts for four years, the country’s 2018 elections were the first to be held since 2009.

The dissatisfaction with the previous five-year delay has led to an emphasis on holding the country’s elections on time. The importance of doing so has been underlined by the country’s disastrous recent events, including the collapse of Lebanon’s banking system in 2019, leading the country’s currency to decrease in value by 90 percent over two years; a series of massive public protests beginning that October, leading to the resignation of the Lebanese government; and an August 2020 explosion that killed hundreds and leveled much of the city’s downtown area.

The government’s response to the explosion has also been criticized as ineffective. Although then-Prime Minister Hassan Diab vowed to resign in the explosion’s aftermath, he served in an interim capacity for more than a year as parliamentarians negotiated a successor. Although his successor, Lebanese billionaire Najib Mikati, took office in September 2021, he was immediately accused of corruption and was later implicated in the October 2021 “Pandora Papers” leak.

Fortunately, there has been little talk of delaying the election, and it will almost certainly take place in the first half of 2022, although some Lebanese have complained that a new election is unlikely to make a dent in the country’s systemic corruption.