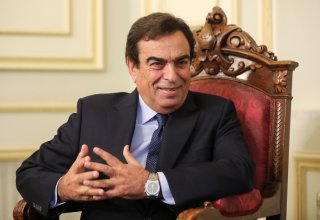 Lebanese Information Minister George Kordahi, whose comments critical of the Saudi government have led to a major political crisis in the Middle East, announced that his resignation was “out of the question” as tensions between Lebanon and Saudi Arabia deepen.

In an interview with Lebanese television channel Al Jadeed, Kordahi indicated that he would not resign under any circumstances, even as the country’s Prime Minister, Najib Mikati, hinted that he should in order to resolve the crisis.

Saudi anger at Kordahi stems from remarks he made during an interview in August, which was aired on Lebanese television last week. In the interview, Kordahi defended the conduct of Iranian-backed Houthi rebels in northern Yemen, claiming that they were “defending themselves” against Saudi Arabia’s “external aggression.”

Saudi Arabia has been fighting a war in Yemen to defeat the Houthis and restore the government of Abdrabbuh Mansour Hadi since 2015. The war, cited as the world’s worst, has led to famine, disease outbreaks, and repeated accusations of war crimes from all sides.

On Friday, Saudi Arabia expelled the Lebanese ambassador in Riyadh, instructing him to leave the country within forty-eight hours. It also recalled its own ambassador from Beirut and announced an embargo on Lebanese imports.

Bahrain and the United Arab Emirates, which have also taken part in the Saudi-led coalition’s campaign against the Houthis, also recalled their ambassadors. To some observers’ surprise, Kuwait, which has not taken part in the conflict, did so as well.

As justification for its measures, Saudi Arabia cited the pernicious influence of Hezbollah, a major militia and political party that most argue functions as an extension of Iran, Saudi Arabia’s regional rival. Hezbollah, which refused to disarm at the end of Lebanon’s fifteen-year civil war in 1990 and fought a brief military conflict against Israel in 2006-2007, has hundreds of thousands of missiles and 100,000 members under arms, according to its leader, cleric Hassan Nasrallah.

Kordahi, who was nominated to his position by Marada, a minor Christian party affiliated with Hezbollah, had not entered office when the controversial interview was taped, and he and the Lebanese government clarified that they reflected his opinion as a private citizen rather than Lebanon’s policy.

Hezbollah, which supports the Houthis, defended Kordahi and rejected calls for his resignation, as did Marada.

Lebanon’s already-devastated economy is likely to suffer further under pressure from the Gulf, which was previously a large supplier of international aid to Lebanon after its 2019 financial collapse and a 2020 ammonium nitrate explosion that destroyed much of downtown Beirut.