Lightning Strike: Marines Have Big Plans for the F-35B Fighter 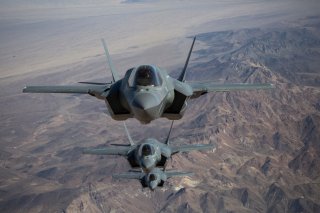 “One day you can have F-35Bs on the flight deck, the next day you could have MV-22s and you can be putting Marines ashore,” said Vice Adm. Karl Thomas, commander of the U.S. Seventh Fleet said, at an event hosted by the Center for Strategic and International Studies and the U.S. Naval Institute.

“And so it just is a very versatile instrument and the fact that you have 14 5th-gen fighters on board – it’s an incredibly capable sensor,” he said

“And so we’re still in the experimentation phase. We wanted to at least try to find out how would you integrate an assault carrier with a full-sized carrier. What missions might it be able to do?” Thomas added.

The type of future mission that the concept would bring to fruition is called “lightning carrier” operations. By leveraging the America-class aviation facilities, the Navy and Marine Corps would load as many F-35Bs onto the ships while reducing the number of helicopters and other assault craft onboard.

“There’s mission sets that I think that it’ll be designed for. I think that there are regions where it can operate in a better capacity. And then I think that because of the vertical takeoff nature of the F-35, you can find yourself putting F-35s in [Expeditionary Advanced Base Operations] and maybe bring them back out to the ship for some maintenance and you move them elsewhere,” Thomas said.

“Maybe you latch them up with the carrier and you use the command and control of the electronic countermeasure capability. ... So we’re still in the experiment phase.”

The Marine Corps’ new Expeditionary Advanced Base Operations would see small groups of highly distributed and mobile Marines flitting throughout the Pacific, particularly in littoral areas close to shore.

By leveraging some new systems the Marine Corps is adopting—including the broader use of anti-ship missiles and the upcoming Light Amphibious Warship—the Corps hope to negate the advantage Russia has in anti-ship missiles, especially closer to the Chinese mainland.

It’s all part of the Marine Corps' Force Design 2030 plans. This initiative would see the Corps transformed from a kind of second Army tailored to fight the types of long, grinding land battles that defined the fighting in the Middle East into a force that could win in the Pacific’s many littoral waters.

Change is in store for the Marine Corps on land—and at sea.