The Palestinian Tragedy Is Israel’s Too 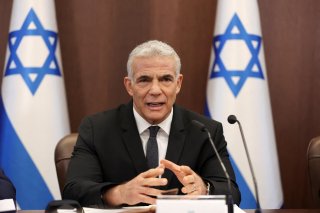 In his recent speech at the United Nations, Israeli prime minister Yair Lapid breathed some life back into the long-dormant two-state solution process. Some believe that it is too late and that the point of no return has already been crossed. There is certainly not much time left before the Palestinians permanently reject themselves out of having any state and Israel settles itself out of a Jewish and fully democratic future.

Since 2009, when Benjamin Netanyahu returned to office, the number of settlers in the West Bank has grown by 60 percent, to over 475,000, gradually but inexorably creating a binational reality. Moreover, the land available for potential territorial swaps is increasingly being used for other purposes. The status quo is an illusion.

The Palestinians have similarly contributed to the emerging binational reality. They repeatedly rejected dramatic proposals that would have given them a state on essentially all of the contested territory and remain paralyzed by a seemingly immutable adherence to an all-or-nothing approach that has, indeed, left the Palestinians with nothing—and deep internal divisions. No end is in sight to the split between the West Bank and Gaza, Palestinian Authority president Mahmoud Abbas is in the twilight of his reign, the Palestinian Authority is tottering, and Hamas remains implacably opposed to any accommodation with Israel. Indeed, a Hamas take-over of the West Bank may be the most likely end to the ongoing rupture.

Lapid’s resurrection of the two-state solution notwithstanding, the Palestinian issue will play virtually no role in the upcoming elections, much like all elections since 2015. For most Israelis, the Palestinian issue has little bearing on their lives, seemingly played out in a distant country that they have never visited and which only penetrates their consciousness after particularly heinous acts of terrorism. Israel has become a global high-tech power, its economy is booming, and the Abraham Accords demonstrated that regional normalization is possible without the Palestinians. More pressing issues present themselves.

Today, however, just 60 percent of the combined populations of Israel and the West Bank are Jewish—hardly a Jewish state—and a majority would have been Arab had Israel not withdrawn from Gaza. Most Israelis are cognizant of the long-term demographic threat to the nation’s character, but they believe there is nothing Israel can do to change Palestinian rejectionism in any event. Thus, they have adopted Israel’s tried and true approach of yehiye beseder (“things will work out”) and simply moved on.

Binational states, as exemplified by Syria and Iraq, are often a recipe for disaster, and a nearly wall-to-wall consensus in Israel opposes an outcome of this nature. The never-ending violence that plays out on Israel’s TV screens, along with the repeated rounds of conflict with Hamas, should be proof enough of what a binational future holds in store. Remarkably, however, right-wing voters continue to vote for parties whose policies will lead directly to this. A disconnect between voter preferences and voting patterns is hardly unique to Israel, but rarely is it so pronounced.

A revitalized peace process should build off the Abraham Accords. The United Arab Emirates, Bahrain, and Morocco, along with Egypt, Jordan, the European Union, and others, should be invited to help broker the talks, under the auspices of the United States. Inclusion among the “conveners” would be based on a number of principles.

First, Israel’s final borders, as stated in President George Bush’s 2004 letter, will reflect “demographic realities” (i.e. the settlement blocs). In practice, this means that Israel will retain 4 to 6 percent of the West Bank, in which nearly 80 percent of the settlers live, in exchange for land swaps, but will withdraw from the rest. The United States and the EU have long accepted the need for land swaps, as, in fact, have some Arab states and even the Palestinians.

Second, Palestinian refugees would be offered a choice between a “return” to the Palestinian state, remaining in situ, or moving elsewhere with compensation, but not to Israel itself (with the exception of limited numbers). In effect, this would result in a de facto international disavowal of the Palestinian claim to an unlimited “right of return,” which together with Jerusalem, constitutes the two ultimate issues dividing the sides.

On Jerusalem, the most feasible solution would likely be akin to Prime Minister Ehud Olmert’s 2008 proposal: the division of the city along its national lines, with an international body to govern the “holy basin” (the Old City and additional holy sites), pending final resolution of the issue. Whereas Olmert had proposed that the international body include the United States, Jordan, Saudi Arabia, Israel, and the Palestinians, an updated proposal would add the Abraham Accords states.

Finally, the conveners would reaffirm that the Oslo Accords, contrary to the public image, never predetermined the negotiations’ final outcome and that the possible establishment of a Palestinian state remains contingent on the successful completion of two critical tests, at which the Palestinians have so far failed abysmally: the establishment of effective self-governance and the prevention of terrorism. The conveners would be expected to finally hold the Palestinians to these conditions. Israel, for its part, would be expected to cease settlement activity beyond the fence line during the negotiations.

Should attempts to reach a negotiated agreement along these lines fail to achieve rapid progress, Israel should act unilaterally to determine its boundaries, renounce sovereignty over the 90 percent of the West Bank beyond the security fence, and begin a phased withdrawal of settlers. The thousands of rockets fired into Israel from Gaza demonstrate the need for ongoing Israel Defense Forces deployments throughout the West Bank for defensive purposes.

Disengagement from the West Bank, as in Gaza, would be unilateral vis-a-vis the Palestinians, but it should be coordinated this time with all of the conveners, not just the United States. It should also be made contingent on a significant quid pro quo —on the refugee issue, for instance—and public recognition that Israel had fulfilled most of the measures expected of it. The actual extent of Israel’s withdrawal might serve as an inducement to do so.

U.S. leverage over Israel is, and should remain, constrained both by the fundamental closeness of the relationship and Israel’s ongoing need for assistance in the face of the threats of Iran and Hezbollah. Even limited American pressure, however, has major resonance in Israel and, if applied in conjunction with the other conveners, the impact would be magnified. Overall, a “carrot” approach would be most effective, including even greater American assistance for missile defense and potentially even a defense treaty; an upgrade of EU ties with Israel, just short of membership; open formalization of ties with Saudi Arabia and others; and a significant expansion of regional cooperation. The impact on Israel’s strategic circumstances and public opinion would be dramatic.

With the Palestinians, American and convener leverage is more straightforward, and the demands must be stark: abandon the rejectionist all-or-nothing approach, agree to a state on almost all of the territory, but not all, and compromise on refugees and Jerusalem, as proposed above, or lose outside support for a Palestinian state. In addition to what should be the ultimate inducement for the Palestinians, the prospect of finally having a state, the conveners would also offer major development aid.

Both Israel and the Palestinians are past masters at stonewalling and derailing unwanted peace initiatives. A breakthrough should only be attempted if and when the appropriate political circumstances prevail on both sides, and even then, only if Washington is truly willing to apply pressure and offer significant inducements.

Bitter experiences with the corrupt dictatorship established by the Palestinians in the West Bank and the radical theocracy in Gaza indicate that a future Palestinian state is more likely than not to be another failed, authoritarian, unstable, and irredentist Arab state. This, then, begs the question of why one would continue to pursue a two-state solution. The answer is simple. The alternative, a binational state, is far worse.

Chuck Freilich, a former deputy national security adviser in Israel, is a senior fellow at the MirYam Institute and the author of “Israeli National Security: A New Strategy for an Era of Change” and the forthcoming “Israel and the Cyber Threat: How the Startup Nation Became a Global Superpower.” Twitter: @chuck_freilich.