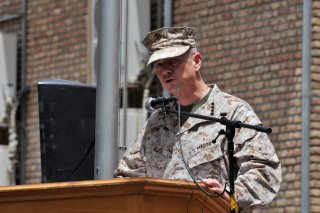 Court documents revealed on Tuesday that the FBI had seized the electronic data of retired Marine Gen. John R. Allen, a four-star general and former commander of U.S. and NATO forces in Afghanistan, over concerns that he had misled the agency over his connections to an illegal lobbying campaign in support of Qatar, the small Gulf emirate known for its vast natural gas wealth.

Allen, who has led the Brookings Institution since 2017, was connected by the agency to Richard Olson, a former U.S. ambassador to Pakistan and the United Arab Emirates (UAE), who pleaded guilty to violating lobbying laws last week.

In applying for the search warrant on Allen, the agency suggested that there was “substantial evidence” that the former general had willfully violated the Foreign Agents Registration Act, which requires lobbyists acting on behalf of foreign governments to register their affiliations with the Department of Justice. FBI agent Babak Adib, who applied for the warrant, also noted that Allen was “simultaneously pursuing multimillion-dollar business deals with the government of Qatar” during his lobbying work, adding that he had given a “false version of events” during a previous interview with the agency regarding his work in Qatar in 2020.

Allen has denied all wrongdoing, and his lawyers have emphasized his voluntary cooperation with U.S. authorities.

Qatar has vastly increased its spending on foreign lobbyists in the United States since June 2017, when Saudi Arabia, the UAE, Bahrain, and Egypt launched a coordinated blockade against it and caused significant disruption to its economy. At the same time, the four nations, particularly Saudi Arabia and the UAE, sought to portray the Qatari government as supportive of terrorism to lawmakers in Washington, leading Qatar to ramp up its own spending on foreign lobbyists to defend its image. Although then-President Donald Trump initially sided with the four blockading nations and criticized Qatar’s leadership, he switched sides the following year, meeting Qatari leader Emir Tamim bin Hamad al-Thani in the White House in April 2018. The blockade has since ended, and President Joe Biden designated Qatar as a major non-NATO ally in late January.

The court filings from Tuesday argued that Allen played a major role in this shift by encouraging H.R. McMaster, then Trump’s national security advisor, to avoid direct criticism of Qatar in the opening hours of the crisis and urge restraint from all parties. That message was ultimately conveyed by then-Secretary of State Rex Tillerson, who insisted “that there be no further escalation” of the matter.

Although Allen did not comment on the new filings, he has previously suggested that his actions in 2017 were intended to prevent a war between Qatar and the blockading countries, which would have been highly detrimental to Washington’s interests in the Middle East.