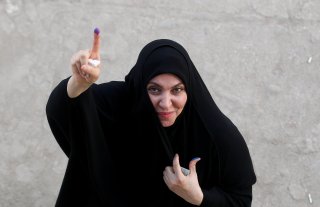 Iraq’s parliamentary election, the fifth in Iraq’s post-2003 history, was marked by popular discontent and a low turnout rate, estimated at 41 percent. However, the official results indicate significant turnover within Iraq’s government, marking a coup for unorthodox Iraqi cleric-turned-warlord-turned-politician Muqtada al-Sadr—and a serious blow to the country’s pro-Iran parties, who saw their share of seats significantly decreased.

Consequently, Iran’s pro-Iran faction has denounced the election, describing the results as a “sham” and pledging not to recognize them. The groups also indicated that they would unleash their militias, contained within the umbrella Popular Mobilization Forces (PMF) movement.

One of the largest parties in the Iraqi parliament, the pro-Iran Fateh (“Conquest”) Alliance, saw its seat share decrease from forty-eight to around twelve, according to the Agence France-Presse. Conversely, al-Sadr’s movement, which currently holds thirty-four seats, will likely see its share increased to seventy-three, making it the largest party in parliament.

Fateh has also pledged to appeal against the results, suggesting in a joint statement that it would “take all available measures to prevent the manipulation of votes.”

Kata’ib Hezbollah, a powerful Iran-backed militia, insisted that the election was “the biggest scam and rip-off the Iraqi people have been subjected to in modern history” and claimed that the result had been rigged by elites opposed to the PMF.

The PMF militias, which were formed in 2014 in response to the rapid rise of the Islamic State, played a critical role in containing them, and the units’ military power translated to political power after the Islamic State’s territorial defeat, to the frustration of many Iraqis. However, pro-Iran forces and politicians were targeted during the October 2019 protest movement, which resulted in the resignation of then-Prime Minister Adil Abdul-Mahdi.

Abdul-Mahdi’s replacement, interim Prime Minister Mustafa al-Kadhimi, appeased protesters by moving Iraq’s election forward from 2022 to 2021, although many expressed their ongoing discontent in the run-up to the vote, contributing to low turnout.

Not all pro-Iran parties faced losses. One surprising result from the election was the re-emergence of former Prime Minister Nouri al-Maliki, whose sectarian rule over the country from 2006 to 2014 was widely described as one of the factors that led to the rise of the Islamic State. However, al-Maliki’s State of Law Alliance was able to secure thirty-seven seats, potentially making it the second- or third-largest party in parliament.

No party possesses a majority, so it remains unclear who will become prime minister after the results are finalized. However, it is unlikely to be al-Kadhimi, a political independent first appointed in an interim capacity.