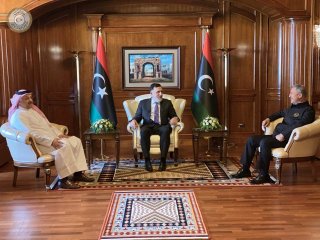 Turkish-backed Arab militias are becoming an increasingly frequent presence in operational theaters, from Libya to Syria to Armenia. Whereas Turkish diplomats once claimed they were an ally in the fight against the Islamic State, the Turkish military and intelligence service has increasingly employed Islamic State veterans to further Turkey’s interests across the region.

The Rojava Information Center, which operates out of Kurdish-controlled northeastern Syria, for example, has identified several dozen Islamic State veterans now working with Turkish-backed forces. These militias have engaged in ethnic cleansing, kidnapped women and girls, and otherwise sought to upset and change the social order. As they displace local Kurds and settle Arabs from elsewhere in Syria, they set the stage for decades of conflict and instability.

Libya, too, is now paying the price for its U.S.- and UN-recognized government inviting in Turkish-backed forces. On September 16, 2020, Libyan prime minister Fayez al-Sarraj surprised Libyans and the international community when he announced his intention to resign. “I declare my sincere desire to hand over my duties to the next executive authority no later than the end of October, in the hopes that the dialogue committee will complete its work and choose a new presidential council and prime minister to hand over responsibilities to and wish them success in doing so,” he said.

Sarraj’s move came just months after he had signed a multibillion-dollar agreement with Turkish president Recep Tayyip Erdoğan not only to privilege Turkish energy firms in Libya’s hydrocarbon market, but also to welcome Turkish support in his fight against Khalifa Haftar, a Qadhafi-era Libyan general who controls most of eastern Libya and enjoys the support of both Egypt and the United Arab Emirates. The influx of Turkish equipment and Turkish proxy militias staffed in part by veterans of the Islamic State and Al Qaeda-linked groups helped save Sarraj after Haftar ordered his forces to march on Tripoli, but Sarraj soon learned the true cost of relying upon Turkish-backed mercenaries: Once Turkish proxies entered the battlespace, they refused to leave. Sarraj had simply replaced a domestic competitor with militiamen loyal to Erdoğan. Sarraj made an unannounced visit to Istanbul on October 4 to meet directly with Erdoğan to resolve the problem, but the damage was already done: Sarraj had effectively reduced Libya to a Turkish vassal 109 years after Ottoman control in Libya ended.

Libyans and the international community are now seeing the diplomatic price they will pay for not having more actively prevented the influx of Turkish-backed militias. On October 23, 2020, following five days of peace talks in Geneva, the Libyan Army of the Government of National Accord and the Libyan National Army of the General Command of the Armed Forces signed an “Agreement for a Complete and Permanent Ceasefire in Libya.” Sarraj declared that “the permanent ceasefire agreement prevents any further spilling of blood and alleviates the suffering of the citizens and paves the way for the success of other economic and political dialogue tracks.”

Erdoğan, however, disapproved. “Today's ceasefire agreement was actually not made at the highest level,” he quipped. “It seems to me that it lacks credibility.” In other words, Erdoğan now considers himself rather than Sarraj the arbiter of Libya’s future. While Sarraj rescinded his resignation, many Libyans now see Erdoğan rather than their domestic political opponents to be the chief impediment to reconciliation.

Turkish-backed militias are now also undercutting efforts to achieve a ceasefire between Armenia and Azerbaijan in continued fighting around the disputed region of Nagorno-Karabakh. On November 3, Russian foreign minister Sergey Lavrov estimated that Turkey has imported 2,000 Middle Eastern fighters into the fight, a number consistent with U.S. estimates. Because the conflict has displaced tens of thousands of Armenians and perhaps even more Azeris over the decades, both Armenia and Azerbaijan have incentives to reach a peace accord. Not only do Arab fighters impede diplomacy now and make it less likely that Baku will recognize that they cannot achieve a military victory, but they also give Erdoğan an effective veto over any local peace agreements in the future. Once inserted into the region, it will be hard for the international community to force their departure. Just as Sarraj realized that the short-term military gains won by utilizing Turkish proxy forces would come at a tremendous price to his own political independence, so too will Azerbaijani dictator Ilham Aliyev soon learn that the Al Qaeda veterans whom Erdoğan sent will constrain all future actions and alliances, especially with regard to Israel and the United States.

To understand just how serious the Turkish militia problem and Erdoğan’s demographic games can be, diplomats and analysts need look no further than Cyprus. It has now been over forty-five years since Turkish forces invaded Cyprus and launched a campaign of ethnic cleansing that left one-third of the island nation under Turkish control. Reversing that might still have been possible over the years: The reason for Turkey’s initial invasion was fear that the Greek military junta sought to unify with Cyprus. That junta’s ouster within days and Greece’s embrace of democracy ended that threat. The influx of Turkish settlers into Cyprus, however, undermined the possibility for a resolution: Turkish Cypriots were traditionally far more moderate in their religious practice and more willing to reconcile with their Greek counterparts than the newcomers. A generation on, the settlers make up perhaps half the population of northern Cyprus. Erdoğan refuses to consider their repatriation making them perhaps the greatest impediment to any peaceful solution to end the island’s almost five-decade conflict. Admittedly, the Turkish settler problem began long before Erdoğan took office but it provides a glimpse into the crystal ball of just how Turkey’s current demographic games can prevent peace decades after open hostilities end.

Back to the present: Turkey now uses Islamist proxies to wage war in Syria, Libya, and Nagorno-Karabakh. Too often, states and diplomats shrug off their presence as a military problem; they should not. They are the chief impediment to diplomacy. As such, any government or leader who accepts Turkey’s proxy forces on their territory should automatically lose diplomatic support, be slapped with sanctions and, perhaps, even be subject to a future state sponsor of terror designation.