Why the Trump Administration Is Wrong on Libya 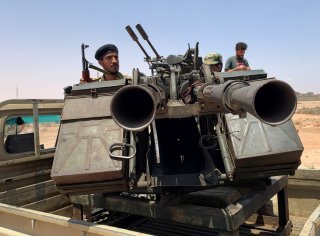 On August 4, 2020, National Security Advisor Robert O’Brien issued a statement lamenting escalating conflict in Libya. “We strongly oppose foreign military involvement, including the use of mercenaries and private military contractors, by all sides,” he wrote, adding, “Escalation will only deepen and prolong the conflict.” It was the type of anodyne but ultimately meaningless statement that passes for substantive diplomacy when none exists. “Libyans can win only if they come together to reclaim their sovereignty and rebuild a unified country,” he stated.

Moral equivalence blinds. Who wins matters. There are two main sides to the conflict. Fayez al-Sarraj is the prime minister of the Government of National Accord based in Tripoli, and Khalifa Haftar who answers to the elected House of Representatives based in Tobruk. Both are deeply-flawed individuals. Sarraj is an Islamist who has not only welcomed Turkish interference and the Islamic State veterans who now populate Turkish-backed proxy forces, but also sold his country’s birthright to Turkey in exchange for his protection against challengers. Haftar, on the other hand, is autocratic and untrustworthy; the State Department resists dealing with him because they fear he would sell them out to Moscow, while the Kremlin assesses that he could just as easily flip on them. Adding to the complexity is the fact that those fighting for each are motivated more by hatred of the other than by loyalty to their leader. What this means in practice is that if either Haftar or Sarraj is defeated, the victorious forces are likely to turn on each other almost immediately.

That does not mean the United States can afford to be neutral, even if neither leader is a democrat. While Haftar includes some Islamists in his ruling coalition, his coalition’s broader outlook is more secular. More importantly, by subordinating himself to Turkey and by welcoming Islamic State veterans into proxies working on his behalf, Sarraj has forfeited any claim to leadership.

The State Department might wring its hands with regard to escalation in Libya, but a dispassionate assessment shows these concerns overwrought. Certainly, Turkey has managed to reverse the momentum of Haftar’s drive toward Tripoli by serial violations of the UN arms embargo, but Turkish President Recep Tayyip Erdoğan has made a significant error. Without a doubt, the Turkish leader has for well-over a decade taken a pair of twos and beat a royal flush because of the timidity of the State Department and regional leaders unwilling to call his bluff. But, as Greece recently demonstrated, he is unwilling or unable to back his rhetoric with action; when confronted, he backs down. But what if he does not? When Egypt recently signaled it would do what it took to prevent the advance of Turkish-backed forces toward its borders, it was not bluster. Turkey supply Sarraj and its proxies with both drones and MRAPs, but the Egyptian military showed that it was able to mobilize and transport into position dozens of tanks in hours; Turkey takes days or weeks to accomplish the same movements toward Libya. Simply put, Egypt is much-better positioned to achieve its aims in Libya than can Turkey.

Whatever Haftar’s flaws, there is merit to siding diplomatically with U.S. allies like Egypt and the United Arab Emirates over states whose visions for Libya would fundamentally undermine Eastern Mediterranean security. No one is asking for the United States to involve itself militarily in Libya. Egypt, however, has reason to fear that an Erdoğan-backed Muslim Brotherhood regime in Libya openly utilizing veterans from both the Islamic State and the Libyan Islamic Fighting Group would not stop at the Egyptian border, but would become a perennial security threat to the Arab world’s largest state.

To stay neutral will not achieve neutrality, for there is no even playing field when Washington stands down but Ankara funds and supplies its allies. Rather, if the White House seeks to ensure Libyan stability and unity, it should focus on Libya’s armed forces. The Iraqi military (as opposed to the Popular Mobilization Units) has once again become a symbol for Iraqi unity. For decades after the end of the Lebanese civil war, the Lebanese Armed Forces likewise became Lebanon’s only true cross-sectarian institution although in recent years it has faltered due to Hezbollah encroachments.

Empty statements will not bring peace to Libya. Nor will intelligence community outreach to wildcards like Saif Qaddhafi, the son of Libya’s late dictator. If Eastern Mediterranean stability is the White House and State Department goal, they should first withdrawal U.S. recognition from Sarraj. His dealings with Turkey disqualify him as a Libyan nationalist and as a figure who can unify the country. Nor should Washington simply endorse an endless series of ineffective conferences in European five-star hotels. Faction leaders might talk, but the diplomacy under such circumstances will always be a side-show to their efforts to seek to control territory by force.

Instead, the international community should seek a combined strategy to interdict Turkish aircraft and ships transporting terrorists and equipment into Libya. If Turkey stops its transports, Egypt will be far more likely to keep its tanks on its side of the border. Then the goal should be to simultaneously build up new Libyan armed forces and a cadre of mid-ranked professional officers who will outlast both Sarraj and the elderly Haftar. There is no short-term fix to Libya; it is time to recognize where U.S. interests lie and play the long game.