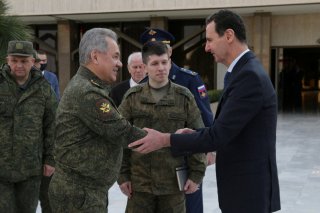 Sergei Shoigu, Russia’s minister of defense, recently traveled to Syria for consultations with Syrian leader Bashar al-Assad, who has relied heavily on Russian support to put down rebel forces during his country’s decade-long civil war.

During his visit, Shoigu is also slated to visit the Khmeimim Air Base in Syria, according to Russia’s Defense Ministry.

Russia recently deployed a set of long-range bombers and fighter jets to Syria in preparation for a series of upcoming naval drills in the eastern Mediterranean. Shoigu’s meeting with Assad included a discussion of the exercises.

The two officials discussed “military-technical cooperation as part of the joint fight” against terrorism and Russian humanitarian assistance to Syria, the Russian Defense Ministry said. Russia made a point of saying that both Russia and Syria were “suffering from the prohibitive sanctions of the United States and Western countries.” Harsh economic sanctions were imposed on Russia after its 2014 annexation of Crimea and on Syria soon after the beginning of the civil war.

Russian troops are present at the Khmeimim base in Latakia, a coastal province in western Syria. Latakia is the historical home of the Assad family and is populated mostly by Alawite Muslims, Assad’s sect. During the most uncertain years of Syria’s civil war, when much of northern and western Syria rose up in open rebellion against Assad, Latakia remained a base of support for his regime, and Russian troops deployed there after the Kremlin’s pro-Assad military intervention in Syria in 2015. In addition to the Khmeimim base, Russia also operates a naval base in the port city of Tartus, which is also located in Latakia.

The upcoming naval exercises in the Mediterranean are slated to include fifteen Russian warships and at least thirty aircraft. The statement released by Russia suggested that the drills were intended to help Russia’s navy “protect national interests,” and “fend off military threats against the Russian Federation,” although the military threats Russia faces in the eastern Mediterranean were not specified.