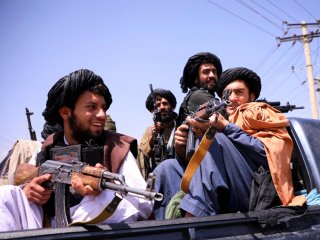 An August threat assessment published by the United Nations has warned that the Taliban has continued to hunt for Afghans who had worked for U.S. and NATO forces prior to their exit from the country, even after promises that they would be forgiven.

The report is confidential and has not been publicly circulated, but Al Jazeera claimed that it described the group’s efforts to find Afghans that had opposed the group during Afghanistan’s twenty-year war. Per the Qatari outlet’s reporting, the Taliban had put together “priority lists” of individuals it suspected of working with coalition forces and intended to question or arrest.

Much of the Taliban’s intelligence was accidentally provided by the United States, which enlisted the group’s help in evacuating high-priority Afghans from the country as part of its airlift. The Taliban also secured many Afghans’ biometric data once they took control of Kabul, making it easier for them to identify their targets.

Ultimately, more than 18,000 people were evacuated from the airport since the Taliban takeover, according to Reuters. At least one hundred Americans remain in the country and are attempting to leave, according to Secretary of State Antony Blinken; the State Department has continued efforts to evacuate them via air but had taken at least one group across the border to Tajikistan by land.

After it captured Kabul on August 15, the Taliban’s spokesmen publicly claimed that the new government would not seek retribution against Afghans who fought against the Taliban or worked for the United States during its twenty-year military presence in the country. However, there have been reports in isolated areas of Taliban fighters persecuting former members of the Afghan security forces, including the execution of a rural police officer.

The Taliban has also cracked down on groups of anti-Taliban protesters, many of whom have used the red, black, and green Afghan flag as a symbol of protest against the new government. Al Jazeera reported that two Afghans were killed in Asadabad, the capital of the country’s eastern Kunar province after Taliban fighters fired on a crowd celebrating the nation’s pre-Taliban Independence Day, leading to a stampede.

In Jalalabad, to the south of Kabul, two men were injured after the Taliban opened fire on a crowd waving the Afghan tri-colored flag, although no deaths were reported.