The United Nations Has a Lebanon Problem 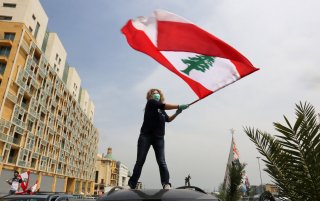 Over the course of four decades, a United Nations peacekeeping force has established permanent residency on Lebanese soil. Despite more than three hundred fatalities and millions of dollars of international funds, their exit strategy is as ambiguous as is their record of success.

In August 2020, the United Nations Interim Force in Lebanon’s (UNIFIL) mandate and budget will be up for renewal, and statements from the U.S. Ambassador to the UN Kelly Craft and United Nations Secretary-General Antonio Guterres have suggested that major changes may be on the horizon. The Iranian-back Hezbollah has clearly found this prospect alarming. Prime Minister Hassan Diab, whose political viability is beholden to Hezbollah, has asserted no changes should be made and Hezbollah’s secretary-general, Hassan Nasrallah, flat out rejected the idea.

It’s not surprising that Hezbollah is resisting any meaningful changes. UNIFIL has consistently failed to achieve one of its primary objectives, the disarming of Hezbollah, due to the terrorist organization’s obstruction and lack of will on the part of the UN to push the issue. This has allowed Hezbollah to metastasize in the South of Lebanon, threatening Israel, supporting the Assad regime, and amassing weapons. All these activities have drawn Lebanon deeper into the web of Iranian influence and cut it off from the world, jeopardizing its stability and security.

Lebanon’s quickly deteriorating status quo is unsustainable and is increasingly becoming a cause for alarm among Lebanon’s historic Christian population, who fear that after Christians have been almost completely driven from Iraq and Syria, Lebanon could be next. Lebanese Christians are looking for tools to help alleviate the crisis they are facing. UNIFIL could be that solution if its mission was implemented strategically.

The upcoming UN renewal of UNIFIL is an opportunity for meaningful and long, overdue reform. It should be used to ensure that UNIFIL is playing an effective role in providing stability and limiting the growth of Hezbollah, instead of the relatively ineffective role they currently play. One obvious change allowed within the mandate would be to task the force with monitoring and securing the porous Lebanese-Syrian border, which has become a lawless highway for smugglers, weapons traffickers, and terrorist fighters alike to move in and out of Lebanon with impunity.

The open border between the two countries has permitted a host of problems to fester, one of which spilled over into Lebanese media in recent few weeks when trucks smuggling desperately needed fuel and grain were caught crossing into Syria. The thriving smuggling business occurring across the border has had a terrible impact on the Lebanese people as commodities they need are either taken to be sold on the Syrian market or brought back into Lebanon to price gouge its desperate citizens. There is also serious concern that U.S. dollars, desperately needed to stabilize the spiraling Lebanese economy, are also being smuggled into Syria as well.

Smuggling food and fuel is not the only concern the open border presents. Iran has used this unsecured border crossing to transport weapons and precision-guided missile technology into Lebanon so that it may be utilized in Iran’s proxy conflict against Israel. Not only does this put innocent Israeli citizens at risk, but it risks the lives of Lebanese citizens that are forced to live under the constant threat of conflict caused by an organization that forcibly compels them to act as human shields against Israeli operations that are seeking to neutralize Hezbollah’s military capabilities.

The insecure border has also led to the further proliferation of the Assad regime’s atrocities in Syria. Without any meaningful border controls, Hezbollah frequently sends its fighters into Syrian territory to fight alongside the Iranian-backed Bashar al-Assad. Reciprocally, Iranian commanders have been spotted crossing the border in Lebanon to further fan the flames of armed conflict.

This is an opportunity for both the United Nations to demonstrate its commitment to going further than maintaining the status quo in Lebanon and for the Trump administration to show that it is willing and able to flex its muscle in the international body to usher in positive change to an institution long accused of inaction and complacency.

Lebanon’s open border and inability to control Hezbollah has allowed Iran’s dreams of a “Shia Crescent'” to become all but a reality with Iranian Revolutionary Guard Corps-affiliated fighters moving into Iraq, Syria, and Lebanon, extending Iran’s reach all the way to the Mediterranean.

There are a number of changes Craft should insist on that will go a long way. Any changes to the mandate need to address the fact that to this point UNIFIL has been at best agnostic to and at worst complicit in allowing the smuggling of arms across the Syrian-Lebanese border. UNIFIL seems more interested in bailing the water out of the sinking boat than repairing the leak that caused it.

For much of its tenure, the peacekeeping force has spent the lion’s share of its time monitoring the heavily militarized border with Israel that Hezbollah continues to stockpile with both crude and precision-guided missiles yet they ignore that weaponry’s source. Without a clear plan in place to stop the flow of weapons from Iran to Hezbollah by way of Syria, there will always be an endless supply of munitions to further militarize the Israeli border.

Much of the infrastructure for this is in place but has gone underutilized. UNIFIL’s existing mandate would cover the proposed border security mission upon simple request by the Lebanese government, which has not been made. Using sensors and drones and in coordination with the Lebanese Armed Forces’ Border Security Units, UNIFIL could provide significant deterrence to smuggling and weapons transfers without expanding its mandate or greatly increasing its footprint.

But given the current political landscape in Beirut, the status quo will remain absent any meaningful action from the international community. Here is where the United Nation can exercise the leadership it continues to give lip service to.

All of this must be geared towards creating an environment in Lebanon in which UNIFIL’s role is no longer necessary. Peacekeepers were never intended to be a perpetual force that becomes so entrenched in a conflict that they never leave. Dismantling the supply line that continues to funnel arms to Lebanon’s southern border is a vital means to that end. Secretary-General Guterres needs to ensure that UNIFIL’s actions are geared towards the goal of establishing a new status quo in which his organization’s presence in Lebanon is no longer necessary.

Toufic Baaklini is the President of In Defense of Christians.