The U.S-Saudi Relationship Is Overrated 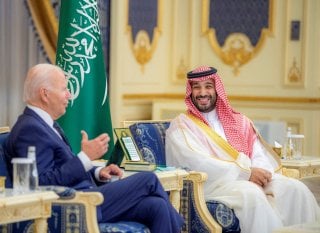 “Enough is enough.” That’s what Senate Foreign Relations Committee Chairman Sen. Robert Menendez (D-NJ) said in response to Saudi Arabia’s push to slash oil production—a move that will jack up gas prices and feed inflation while bolstering Russian president Vladimir Putin’s ability to continue his war of aggression on Ukraine. Menendez has threatened to freeze any security cooperation with Riyadh until it reassesses its ties with Russia. Meanwhile, Sen. Richard Blumenthal (D-CT) and Rep. Ro Khanna (D-CA) are leading the charge in calling for a suspension of weapons sales to Saudi Arabia for one year.

While the American public likely supports the backlash in Washington—new polling by the Eurasia Group Foundation shows that majorities of Republicans and Democrats oppose U.S. arms sales to Saudi Arabia—a reassessment of the relationship should have occurred years ago. The White House announced that the kingdom would face “consequences'' for its decision to slash oil production, but it has yet to specify what those consequences will be. There is a danger that the immediate outrage over Saudi-Russian collaboration may pass without any serious action taken to hold Saudi Arabia accountable.

The United States has covered up for Saudi Arabia despite its domestic human rights abuses, brutal war in Yemen, and repression of critics (including the murder of journalist Jamal Khashoggi, a U.S. resident). The argument for giving Saudi Arabia a free pass, including the continuation of arms sales, has been the claim that maintaining the relationship is too important for U.S. national security, energy, and economic interests. The decision to slash oil production, an outright slap in the face to Saudi Arabia’s supposed closest partner, is one example in a long list of reasons why the relationship is not worth maintaining in its current form.

The primary reason Democratic and Republican administrations have never faltered in their commitment to Saudi Arabia until now is the kingdom’s role in ensuring stable oil prices—a role it has not always faithfully exercised. Saudi Arabia has historically played an outsized role in determining oil prices, as it is the Organization of Petroleum Exporting Countries’ largest producer of crude oil. And even though the United States has become more energy independent, what Americans pay at the pump is still affected by a number of factors in the global market, including how much oil-rich countries like Saudi Arabia decide to produce.

The Saudis are also considered an important security partner in the greater Middle East. The seemingly impermeable relationship was solidified during the first Gulf War, when Saudi Arabia supported America’s military intervention in Kuwait to oust Iraq. Saudi Arabia allegedly backs the United States in dealing with Iran, supporting Israel, and combating terrorism. But the value of Riyadh’s support on these fronts has been overstated. And nothing Saudi Arabia has done or can do on these important security matters justifies its misconduct at home, in Yemen, and in the broader region.

In reality, Saudi Arabia’s support and benefit to the United States has been quite limited. America’s intervention to roll back Saddam Hussein’s invasion of Kuwait was indeed made possible because of the over 500,000 U.S. troops that were hosted by Saudi Arabia. But while the operation was technically a military success, the weakening and isolation of Iraq following the war paved the way for multiple crises, creating an even larger security problem for the United States, including the 2003 U.S. invasion of Iraq and the rise of the Islamic State in Iraq and Syria. Decades of policing the Middle East have not gotten the United States very far, doing far more harm than good to U.S. and regional security.

Saudi Arabia might be seen in Washington as a key player in containing Iran, but the threat to the United States from Iran has been exaggerated. Tehran’s conventional military is relatively weak, spending far less on its military than the United States, Europe, or the Gulf states. Iran’s military power is largely asymmetric, grounded in its arming of non-state actors and its ability to strike targets in the Gulf with its arsenal of missiles. But the best way to diminish these potential threats is through diplomacy, not arming Saudi Arabia and igniting a new Middle East arms race.

Prospects for a diplomatic breakthrough between the United States and Iran are low at the moment, given Tehran’s repression of the domestic democracy movement and its role in supplying armed drones to Russia for its war in Ukraine. But promoting dialogue and detente among the key players in the region should remain a goal of U.S. policy, including a last-ditch effort to save the Iran nuclear deal, which would stop Iran from developing a nuclear weapon. Instead, the Biden administration is seeking to expand the Trump administration-initiated Abraham Accords, which are ostensibly designed to improve relations between Israel and its neighbors but may instead be transformed into an anti-Iran coalition that would increase the prospects of war in the region.

America’s unwavering support to Riyadh is also based on the belief that arms sales to Saudi Arabia create American jobs. These claims by arms manufacturers and supporters of arms sales have been greatly exaggerated. President Donald Trump claimed there were up to 500,000 U.S. jobs generated by sales to the kingdom, when in fact the figure is one-tenth to one-twentieth of that amount. In addition, many of the jobs associated with U.S. arms sales to the regime are in Saudi Arabia, as de facto Saudi ruler Mohammed Bin Salman seeks to build up Saudi Arabia’s arms industry. Virtually any other use of the money spent on U.S. arms sales to the kingdom would create more employment, from infrastructure to green energy to health care or education. In the long term, prioritizing exports of green technology will do far more for U.S. jobs than selling more weapons. The market for green technology is growing far faster than the market for arms, and it will continue to do so over time.

The newest and perhaps most salient argument against cutting defense ties with Saudi Arabia concerns Riyadh forging stronger ties with Russia and China. Chairman of the House Armed Services Committee Adam Smith recently warned: “You will see Saudi Arabia turn more and more to Russia and China. And how does that play out in terms of meeting our interests?” These concerns are overwrought.

While it’s true that China is Saudi Arabia’s largest trading partner, neither Russia nor China can replace the United States as the primary supplier of arms and logistics to the Saudi military, absent decades of time and tens or hundreds of billions of dollars in weapons purchases. The Saudi armed forces would be hard-pressed to operate without U.S. support, which gives Washington considerable leverage in pressing the regime to stop some of its most damaging activities, be it collaboration with Russia or waging war on Yemen.

The Biden administration needs to change the character of the decades-old relationship between the United States and Saudi Arabia. This is true not only because of the latest OPEC+ decision to reduce oil production, which has left Saudi Arabia essentially siding with Putin as he continues his war against Ukraine. The relationship needs to be reassessed because the negative impacts far outweigh the benefits for the United States. The Saudi regime must be held accountable, and outmoded arguments about the alleged strategic and economic benefits of the U.S.-Saudi relationship should not be allowed to stand in the way.

Caroline Gray is a senior researcher at the Eurasia Group Foundation.

William D. Hartung is a senior research fellow at the Quincy Institute for Responsible Statecraft.