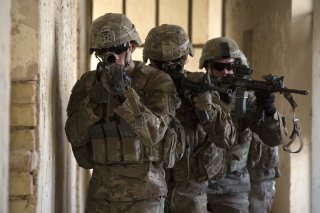 The U.S. Army released the name of a soldier late on Tuesday who had been killed near Erbil, Iraqi Kurdistan in “a non-combat-related incident” on Monday.

The details of the incident were still unclear, but the international counterterrorism coalition was quick to deny that the coronavirus, also known as COVID-19, was the cause of death.

“The cause of death remains under investigation, but COVID-19 is not suspected,” a spokesperson for Operation Inherent Resolve wrote in a statement.

The Army identified the deceased soldier as Sgt. Christopher Wesley Curry, a twenty-three-year-old man from Terre Haute, Indiana, after notifying his family.

The incident occurred in Erbil, the capital of the semi-autonomous Kurdistan Region of Iraq.

The U.S. military also awarded Purple Hearts on Monday to twenty-nine U.S. troops who had been injured in the Iranian missile attack on Al-Asad Air Base on January 8. Over 110 service members received traumatic brain injuries during the attack, which came as retaliation for the killing of Iranian spymaster Maj. Gen. Qassim Suleimani.

Eighth members of Combined Joint Task Force Operation Inherent Resolve, the international coalition against the Islamic State in Iraq and Syria, have passed away this year.

Three members of the coalition, including two U.S. troops and a British combat medic, were killed when Iranian-backed militias attacked Camp Taji in the outskirts of Baghdad on March 11.

Islamic State militants killed two Marines during a joint U.S.-Iraqi raid against a cave complex in the Kurdish region on March 8.

Ninety-four U.S. service members have lost their lives in total during Operation Inherent Resolve, according to statistics released by the Department of Defense on Monday. Seventy-three of these deaths—as well as two Department of Defense civilian employee deaths—were due to “non-hostile” action.

The task force has not announced any cases of the novel coronavirus within its ranks, which has been a persistent concern for U.S. forces around the world. All new personnel are subject to fourteen days of quarantine before joining Operation Inherent Resolve.

There are more than five thousand U.S. troops still deployed to Iraq and Syria.